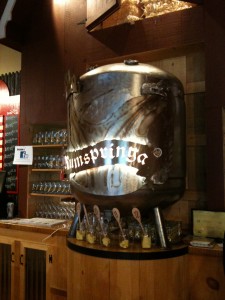 How could you not stop at a brewery that’s named after the period of time that Amish adolescents take to sow their wild oats before they commit to the Amish lifestyle and is located halfway between Bird in Hand and Intercourse, Pennsylvania? I certainly had to stop to sample some beers at Rumspringa Brewing Company, Lancaster County’s only nano-brewery.

The Rumspringa taproom can be found upstairs in the Lancaster Beer and Wine Gallery. The downstairs specializes in  wine but both beer and wine can be sampled in the taproom.

I sat down at the bar to try Rumspringa’s four regular beers; Harvest Gold, Red Caboose Ale, Two in the Bush IPA and Wild Oats Stout and the seasonal Chocolate Blackberry Stout.  To be honest I wasn’t expecting much from Rumspringa’s beers but on the whole I was pretty impressed by the breweries offerings. The harvest Gold was a very nice example of a krolsh and I thoroughly enjoyed the Red Caboose Ale. While never my favorite, the IPA was a fine example of a west coast IPA. The weakest of the beers was the stout. It was thin and didn’t have the mouthfeel I expect in a good stout. The Blackberry stout on 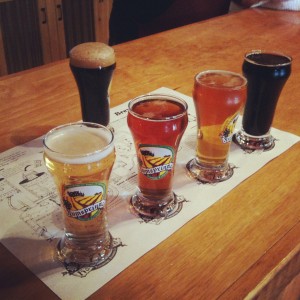 the other hand was not as thin, having the texture I expected though the chocolate flavors were subdued.

There are no tours here just a comfortably furnished, clean and new looking taproom. My bartender was new as well and unfortunately didn’t know the beer lineup very well, but he was friendly and eager to talk about the brewery and the countryside. Rumspringa was an unexpected diversion in my trip that I enjoyed making.

Al of Rumspringa’s beers are available in bombers and they sell several styles of growlers. Samples for five beers (and a discount on glassware) are $8.00. 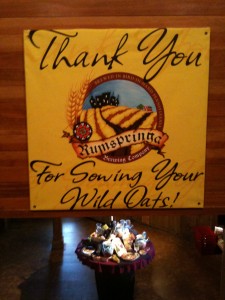