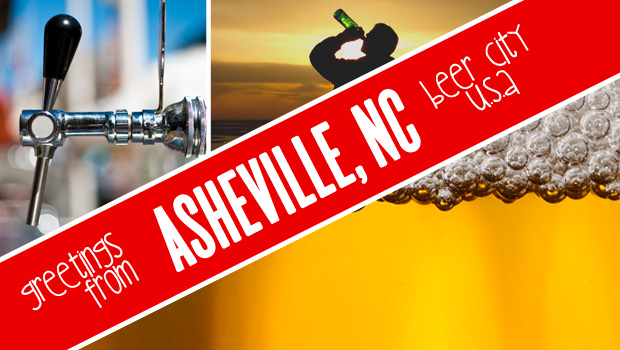 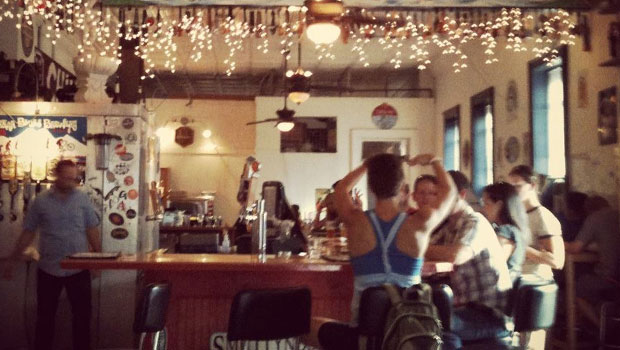 The bar upstairs at Thirsty Monk 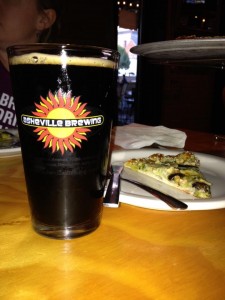 As you may have gathered form my recent vacation posts about Wedge and Pisgah that my wife, daughter and I recently took a weekend trip To Asheville North Carolina. Asheville has been voted Beer City USA for several years in a row and it has been on my “beer bucket list” for a while. I’m not sure how it is that I hadn’t made it there already, especially since Asheville is only about 5 hours from where we live in Savannah, GA. In any case I was excited to finally have a chance to check out this great beer town, even if it was only for a long weekend.

We pulled into to town late afternoon on a Saturday and went directly to our hotel to check in. We stayed at the Downtown Inn and Suites which is in fact located right downtown at 120 Patton Rd. At times the decor was less than desirable (you should see the wallpaper in the stairwells!) but the room was clean and comfortable, and you just can’t beat the great rates for a hotel in the heart of the action. It seems Asheville takes their title as Beer City USA rather seriously, as I found a handy guide to “The Craft Breweries & Pubs of Western NC” in the lobby. A little cheesy maybe, but it did prove itself useful on a number of occasions when needing addresses and operation hours. Not knowing what to do or where to go we started to wander around the city for a few minutes trying to get our bearings on where we where. The city itself was just about exactly what I expected. Lots of small shops, bars and restaurants. The streets we’re pretty crowed with people enjoying the remainder of their Saturday afternoon and enjoying a cold beer during happy hour. About every 14 feet or so you will find someone playing every instrument know to man. Needless to say my need for a beer following the long drive was pretty high, so we quickly decide to back track to Thirsty Monk for a beer or two and to map out visit. 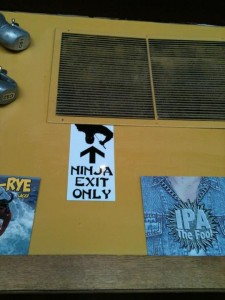 Recognized nationally as one of the best beer bars in the world, Thirsty Monk has about 20 rotating taps with a separate bar downstairs focusing on Belgian style beers. The front of the bar is totally open to the street with a long bar to the back, very comfortable. I never got a chance to head downstairs but that is something to look forward to on our next visit. We settled into a high top table and I went to the bar to order some beers. I very quickly zeroed in on Dark Horse Crooked Tree IPA which was really good. In fact I got another one for my second round, which if you know me really says something, I rarely order the same beer twice. Emily tried a Terrapin Samurai Krunkles that was promptly spilled all over the table. After a quick clean up I got her a Crooked Tree as well since the ginger was too strong for her in the Terrapin Samurai Krunkles. Jacqueline had a bottle of orange soda that I can’t remember the name of. I can see why this place is so popular: great beer list, good service and relaxed atmosphere. A must stop on any trip to Asheville.

This will lead me to two of my few “complaints” about Asheville, and I put that in quotes because they have more to do with me than with the city itself. First if you are going to Asheville to drink I would say the city isn’t very child friendly. Although every pub we went to was accommodating to my family, there really wasn’t much for kids to do downtown. If we had planned a longer trip I am sure we could have researched and come up with things for Jacqueline to do, but since we were basically there to drink it was a noticeable problem for us. I will take the time to say that I am so grateful to have a wife and child that will allow me to indulge in my hobby. In return I try to never take them beer shopping (exciting for no one but me) and I do my best to respect their beer boredom levels. I have to say Jacqueline was so great the whole trip, pretty much coloring and playing quietly while we enjoyed beers. I am a lucky Daddy to have such a great kid. My second “complaint” would be that due to living in the same general area of the country I was seeing a lot of things on tap that I can get at home. This obviously is not a problem at a local brewpub or brewery, but for a regular bar like Thirsty Monk a good 80% of the beer listed are things I can get in Georgia. Again not the city or bars fault, but a small issue for me personally. 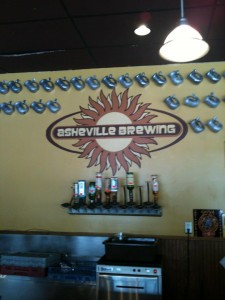 After returning to the hotel to freshen up we decided to take the short walk to Asheville Brewing Company for dinner. They are Asheville’s third oldest brewery and they also have great pizza, seemed like a good choice! It was a busy Saturday night but we were able to find a table right away that was quickly cleared for us. Jacqueline had a slice of plain cheese and Emily and I shared the Shear Delight, a pizza with sesame seed crust, pesto sauce base, portobello mushrooms, walnuts & gorgonzola cheese. (Yum!) Now on to the beer!! I started with the Ninja Porter and I was rather impressed. After the amazing Ninja Porter I had high hopes for JT’s Oatmeal Stout. Those hopes were quickly dashed. The body of this was remarkably thin, the dark roasted flavors seemed very mild and the taste of alcohol was way too prevalent. By no means the worst beer I’ve had, but I feel like it could have been so much better. Emily went extreme ordering the Fire Escape, which is the Escape Artist Pale Ale with 127 pounds of smoked jalapeno peppers added. Our overall meal and experience was fantastic and before leaving we got a couple of pint glasses and  two 22oz bottles to have back at the hotel. After Jacqueline was bathed and asleep we drug our hotel chairs outside and enjoyed some Escape Artist and Shiva IPA along with the cool breezes of an Asheville summer night.