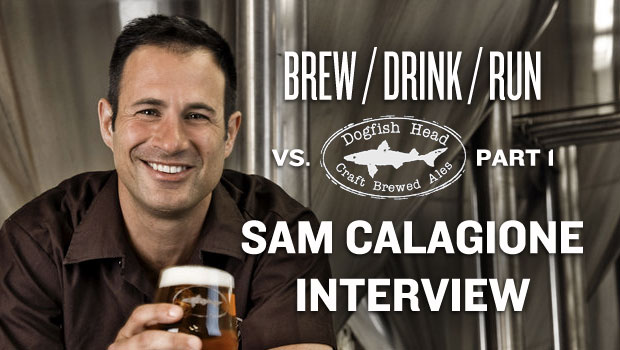 Every field has one or two ambassadors, those clear voices that are able to rise above the din of thousands of experts and explain the intricacies and nuances of a subject without dumbing down the conversation.

Astrophysics has Neil deGrasse Tyson, physics has Richard Feynman, food Julia Child, and fashion has Tim Gunn. If craft beer has such a representative it’s Sam Calagione, founder and owner of Dogfish Head Craft Brewed Ales. Through his books, TV shows and regular appearances at beer events of all types he has been able to explain the art and business of craft beer.

In the first of a three part series on Dogfish Head Brewing, Brew/Drink/Run staff Lee, Keith and Raymond had the opportunity to speak with Mr. Calagione to discuss home brewing, beer (especially the Ancient Ale Series) and how Dogfish Head supports fitness and running.

Our discussion began with homebrewing and the first batch that Mr. Calagione brewed, a pale ale spiked with very “ripe and mushy cherries” that he happened to see on special at a bodega on the way home from the homebrewing store. That reactionary and experimental nature has been maintained at Dogfish Head. Calagione tells us that while he currently “home”-brews in the 150 gallon system in the Rehoboth Beach brew pub instead of the five gallon system he and most home brewers start off with, he does brew up a new batch every two months or so. Most of these never make it past the taps in Rehoboth; but occasionally they do make it to the bottle for distribution after serious vetting by the discerning regulars at the brewpub.

Home brewing is encouraged at Dogfish Head Brewery. The Small Batch Brewing program provides employees with all the ingredients and motivation needed to brew up any recipe they can imagine. Mr. Calagione tells us that these staff brewed beers are compared head to head with those served at Eataly La Birreria, a restaurant in New York that Mr. Calagione developed with  Mario Batali and three other breweries. From these experimental beers, 20 or so may one day actually make it to market, though Mr. Calagione would not give us a hint of any of what was on tap now that may make it to bottle next year.

We were particularly interested in speaking with Mr. Calagione about the Dogfish Head ancient ales program in which they recreate beers using evidence found in archeological sites from around the world. When asked how the series came about, Mr. Calagione replied “from being made fun of by other brewers” who wanted to know what kind of “weird shit” he was putting in his beer that week, and the “analog beers for the digital age” beers he was producing in 1998-99. The first ancient ale, Midas Touch, grew out of this with the help of Dr. Pat McGovern, a molecular biologist and University of Pennsylvania professor who studied the dregs of vessels found in a what has been called King Midas’ tomb. Mr. Calagione  sees these beers as a having great potential for experimentation. Brewed in the days before hops was used as a flavoring agent, the “palette brewers used back in the day was a broad as all culinary ingredients.”

This experimental nature of the program lends itself to some leeway. We asked Mr. Calagione about his approach to setting parameters and flexibility to make decisions within that gray area: “It’s mostly instinct. If there is molecular evidence then the recipe is driven by the molecular evidence, but even when there is molecular evidence, meaning residue on crockery that gets analyzed, that can only tell us what ingredients were used. That gives us huge discretion on what was the alcohol by volume, what was the level of filtration, was it served carbonated?, was it served cold? and what was the ratio of those ingredients.” This leeway, instinct and new evidence found in tombs is being used to create the next ancient ale and Etruscan themed beer called Birra Etrusca, in collaboration with the breweries Balladin and Del Borgo. Dogfish Head is using food grade bronze to add to the fermentation process to add to the authenticity of the beer. Intuition makes for great beer but sometimes it isn’t always effective. Mr. Calagione tells us that Dogfish Head dumps about $100,000 of beer every year because it “just didn’t go exactly the direction we wanted. That happens with brewers all the time. You’re dealing with living organisms and sometimes they don’t do what they are expected to do.” Intuition also led Mr. Calagione to modify some of the ancient ales such as the Sha‘ Tea, a Finnish based beer that includes the very non-traditional ingredient of Chinese tea. “That’s an example of one where we followed our own muse… The traditional shaei is brewed with a bakers yeast … but also has a lot of hefeweisen character naturally… so let just replace that with a hefe yeast and amplify the spicy nature of the yeast and the rye by actually getting a custom blended tea from China but also using the traditional Finland techniques of making shaei, including the hot rocks.”

Many of the regular beers and the ancient ales blur the line between beer and wine. We asked Mr. Calagione where does beer stop and wine begin in his beers and does it matter.  “I don’t think it matters, well I think it matters in that we need to stop thinking about beer as only the right textbook definition because I’ve been lucky enough to be involved in so many of these ancient recreations as the vast majority were brewed with mixed fermentable sources…almost all of these were hybrid beverages so we don’t market Midas Touch as a beer or as a mead it’s just Midas Touch, a hybrid beverage. The federal government has certain mandates that set certain percentages has come from grain and we comply with that but beyond that we push the limits on bringing in other fermentable sources in and have since ’95 with Raison D’Etra and Immort Ale, not just the ancient ales.”

The culture of Dogfish Head is such that they are continually reinventing themselves and keeping their fans eager for more. This culture is in part created by the company’s willingness to make decisions that are not necessarily financially sound but keep the company fresh and exciting. “That’s what we love to do, keep exploring and it’s getting rare. There aren’t too many breweries of our scale that are putting as much resources into that exploration outside of core seasonal brands. It makes us better brewers.”

Mr. Calagione also pointed to Positive Contact, now on the shelves, a “cider hybrid” beer that builds on the Dogfish Head culture. Positive Contact is sold in six 750-ml champagne bottles cases with a vinyl record with music developed with Deltron 3030 and produced by Dan the Automater. There were several recipes developed by Mario Batali and Baby Cake that are intended to complement Positive Contact’s flavors. “It’s such a unique project that we know it’s worthwhile and reflects on our company and our culture that is makes sense to make that investment. The goal of these projects is to get our peanut butter in the artists’ jelly. Deltron fans who didn’t know about Dogfish are turned onto Dogfish. That’s awesome – and if Dogfish fans are turned onto Deltron 3030, that’s equally awesome. It’s kids of like one plus one equals three.”

Not wanting to close the conversation without talking some running we asked Mr. Calagione about the Dogfish Head Dash, a 5k and 10k road race that benefits the and benefits the Delaware Chapter of The Nature Conservancy and ends at the Dogfish Head Craft Brewery. “It’s one of our biggest events and our biggest fundraising events. I give my wife a lot of credit, Mariah, for organizing that event. It sold out in a couple of hours this year. She was the one who put it together originally and runs it every year.”

Unfortunately Mr. Calagione doesn’t run due to a back injury he sustained playing hockey but he tells us “Doing something physical everyday is so important for my sanity and stress level and I think the culture of craft brewing and just outdoor sports and activities are so overlapped. Looking at my co-workers and everyone I know in the industry it’s just a natural (fit). It’s about treating your body with respect both in physical activity and what you put in your body. A chance to drink these all natural beers, that are great carb sources and make you feel better but your participating in nature the same way you would be in a paddle or a ride on your bike.”

On a personal note, as an artist I’ve been fond of Mr. Calagione and his interest in the Black Mountain College, an art school formed in rural North Carolina that courted some of the best art professors and graduated many well known artists during its 20 plus year existence. In his book, Brewing Up a Business

he speaks often of the Black Mountain College and its unofficial motto philosophy was “We shall see what we shall see.” This motto reflects Dogfish Head’s motto “Off-centered Ales for Off-centered People.” A motto that is at the core of why Dogfish Head beers and Mr. Calagione are so popular.