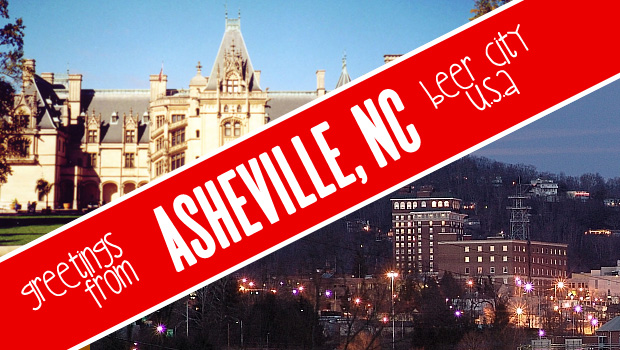 After breakfast and a morning run for Emily (I stayed at the hotel with Jacqueline) day two of our long weekend in Asheville started with a little wandering around the city of Asheville. Street after street is lined with great restaurants and shops, rail kids and street performers, young families and those shielding their hangovers form the sun (sometimes one and the same). Neither of us are big shoppers but window shopping was a lot of fun. We ended up having a late lunch at Laughing Seed Café. Laughing Seed is an all vegetarian restaurant and was the one place Emily insisted on going to. They we’re still serving brunch which suited me just fine as I can eat breakfast just about any time! Before settling on our meals, which was hard to do since they had run out of quite a few menu items and ingredients, I ordered a Green Man India Pale Ale. It is an  English IPA that tastes more like an American IPA to me. The malts are of a muted caramel that are dominated by a solid hop bitterness along with some surprising tropical/citrus fruit notes. Regardless of whatever category this falls into it’s good! I had The Avocado, Tomato and Bacon Omelet:  jalapeño butter, avocado, herb-marinated tomatoes, Treadway Farms shiitake bacon (sub seitan sausage since the bacon was gone), monterey jack cheese, and house salsa; and Emily had the Sooner Sunday Bowl: creamy grits, house seitan sausage, tofu scramble, sautéed spinach, yukons, guacamole spike, and choice of vegan or buttermilk gravy. Some of the best gourmet vegetarian food I’ve had in a while! Stuffed and a bit sleepy we walked some more and waited for a call from our friends Brain and Melissa before heading off to Pisgah Brewing in Black Mountain NC.

A bit of resting was in order after returning from Black Mountain, so we all headed back to the Downtown Inn to nap for a bit and freshen up. Dinner time came up quickly and we decided to give The Oyster House a try. This was a pleasant little place, long and narrow with a nice open kitchen. We were seated in front of the lobster tank which was a bit depressing, but that didn’t stop us from ordering Lobster rolls with lobster mac and cheese for dinner. Both Emily and I had an Moonstone Oyster Stout to drink. Solid roasted flavors with just a hint of brine. Overall the mouth-feel was on the thin side, maybe this was an Dry Irish Oyster Stout? It might not be the best Oyster stout in the world but sure paired well with the food. The lobster rolls came quickly and I must say I was pretty impressed. Obviously not as fresh as the rolls I’ve had in Maine but still quite tasty. Jacqueline had some fish which I will assume was good because it was gone in a flash. Our waitress was very nice and friendly without being intrusive. She knew just how long to chit-chat with us before heading off to another table – great service. We headed back to the hotel where I left an exhausted Emily and Jacqueline to find a bar with a few beers I’ve never had the chance to try. I found my way to Barley’s Taproom & Pizzeria. A two story building with a family friendly pizza joint downstairs and a 21 & up bar upstairs. I skipped checking out the pizzeria and headed up the stairs of the separate bar entrance in the hopes of ending this great day with a few more good beers. You’ll find a backwards L shaped bar at the top of the stairs of this dimly lit room. Most of the upper floor is pool tables of which one was in use by three friends sharing several pitchers of Guinness. I had planned to take a few pictures of the bar but to be honest there wan’t much ambiance to speak of, but I did like the fact that the first Stone Roses album was coming out of the speakers. At the bar were a couple of young girls and one single middle aged woman, otherwise the place was pretty quiet on a Sunday night. On occasion someone would appear from downstairs to order a pitcher to bring down, I guess the beer selection is different on each floor. I found a seat at the bar and after a few minutes settled on my order. The bartender was nice but not talkative which suited me just fine. I ended up ordering a Foothills Seeing Double DIPA for my first round and a Catawba King Coconut Porter after that. The Coconut Porter turned out to be the best beer I had on my trip! I made the walk back to our hotel once again content with another great beer day in Asheville. 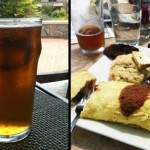 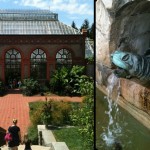 The conservatory and a fountain at The Biltmore Estate 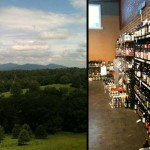 We decided to head to The Biltmore Estate on Monday for our final full day in Asheville. It was a long and fun day with the family. If you have never been it is an impressive mansion and the garden and conservatory are rediculous. We decided to stay on the estate for lunch and to sample some wines . I found it interesting that there is a Biltmore Brewing Company serving its own beer at Cedric’s Tavern, which is where we had lunch. You know craft beer is growing rapidly when a place so well known for it’s wine invests in brewing craft beer. That being said I ended up having an Asheville Brewing Rocket Girl instead of either of the two Biltmore Brewing beers on tap. An American Pale Lager isn’t my usual choice but this crisp and refreshing brew hit the spot on a warm day. We finished our visit with a trip to the wine tasting room then sharing a sundae. I dropped the family off at the hotel before heading right back in the same direction to Appalachian Vintner to do a little bottle shopping. Appalachian Vintner is a huge storefront selling mostly wine but also has a solid selection of beer. It seems that this retail store is also a bar, and being from a blue law state like Georgia I found that totally confusing. Most all of the beer and wine was lining the stores walls leaving a very odd and open feel to the store. I guess they would have plenty of room to add shelves to expand into the middle center of the store as they grow. In addition to the bar, there are a few comfy couches, but I didn’t come here to chill, I came here to shop for some beer! It didn’t take me long to find plenty to take back home with me, including some beers from Olde Hickory, Thirsty Dog, Foothills, Dark Horse, Ska and Cascade to name a few. I suspect the guy checking me out was an owner because he apologized a few times for the selection, letting me know that his stock is usually pretty depleted on Mondays after the weekend. We chatted about distribution and different beers for a while and he was nice enough to give me a free glass (they had an extensive selection of glassware as well) for spending so much money. For the total beer geeks out there who must know, I chose a Scotch Silly tulip. Well worth the visit when you’re in Asheville. Although pretty tired form a long day, we strapped J into the stroller and headed down to Wedge for more beer with our friends. That visit to Wedge is a whole another adventure in and of itself that you can read about too!

After a much needed nights sleep we packed up the car, got some coffee and headed home. I am already looking forward to a return visit to Asheville. What a great beer town!