We have discussed a lot about how and why we brew beer. We have also talked a lot about the different types of beer we drink. Hopefully, this can help explain another reason why we run (other than to burn off all those beer calories).

Friday evening was a race night in Winder, GA. I was not one of the competitors. I was simply there to watch our kids and cheer on my wife, Nicole, as she  attempted to set a PR in a 5K race. There was a kid’s fun run of slightly less than a mile and my 6-year-old son wanted to compete. So, this is what we did after work and school on Friday night. 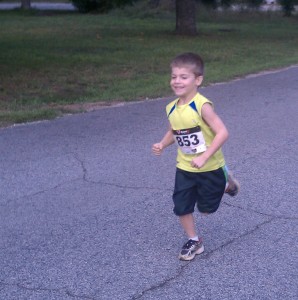 The evening started with the fun run. Nate was poised at the front of the pack and completely focused on the run.

We decided to let him run this one on his own since it was an “out and back” loop where we could get a good vantage point of almost the whole course so he would not really be that far out of vision. He started out pretty good with a nice and easy pace. Nicole watched him go down the front stretch and my daughter Nia and I waited at the back stretch and by the time he reached us, he was in 6th place. The look on his face when I let him know this information was priceless.

He headed up the little hill to the turn-around point and we waited for him to come back. When he did he was in 4th and chasing 3rd.  Nia and I rushed over to the finish line to see where he would finish and we saw him racing for 3rd. This next picture says it all for me on why to run and was the on the faces of nearly everyone that I witnessed finish that evening — determination. The number of runners I saw give that last little bit of effort to cross the finish line a few seconds faster was pretty awesome. The times that I saw the trailing runner push herself a little harder to improve her standing just one more place was pretty impressive. The look on their faces showed that they were working for something. Those looks made me wish I was racing that night. 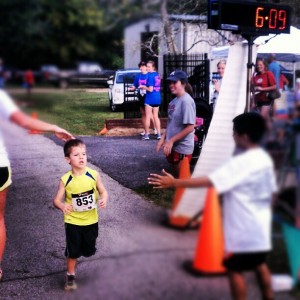 This is my little man finishing 3rd for the 3/4 of a mile Fun Run. He gets a small pat on the head and a quick high five from 2nd place. But the satisfaction of a job well done (and the big deal two excited parents and one proud big sister made) will make him want to do this again. I mentioned my wife earlier. She had a goal of a PR. This is where running is different from other types of physical competitions. Her goal was not necessarily going to win 3rd. Her goal was to improve herself and do something she had not done before. She did not need to rely on anyone else to get there and did not disappoint anyone else if her goal was not “good enough” for them. I am proud to say she did it and she is pretty excited about it as well. I am pretty sure someone gave her a high five at the end too.