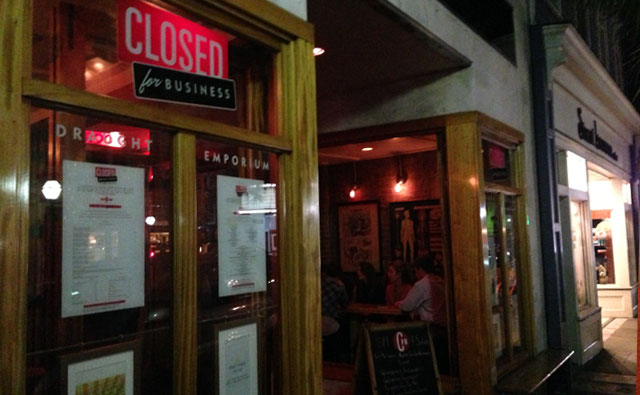 A Saturday trip to Charleston, SC to see the band My Jerusalem perform at Tin Roof afforded the opportunity to take in some local beer action. The Charleston Beer Exchange was my first stop (where I dropped a ton of change on a mere handful of hard-to-find bottles) and then we mosied on over to Closed for Business, a craft beer bar and restaurant. With forty-two taps, they’re bound to have something you want to taste.

The vibe is quickly set by the decor. Tables in the front were flanked by large windows that open into the street. A long bar and scattered tables leads to a booth area in the back. We settled in to a booth and kept a lazy eye on the Michigan/Illinois game silently playing on a wall-mounted flat screen. The soundtrack was provided by the White Stripes, Black Keys and Queens of the Stone Age coming through the PA at a nice volume – loud enough to recognize, but quiet enough to have a conversation. The lights were low and incrementally lowered as afternoon turned to night. The server (Emily) was friendly and knowledgeable. She took our beer orders (a first round of Westbrook’s White Thai on draft) and later our food requests (fried chicken sandwich, pork slappers). 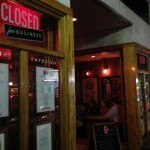 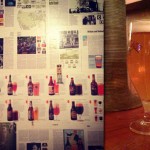 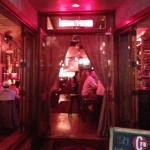 A table-mate was interested in their kriek-topper service. They will add a shot of Echte Kriek to any beer for an additional $1.50, adding a bright tart fruit twist. She brought out free tasting samples and then incrementally increased the kriek (gratis) to his liking on his full pint. For my second round I imbibed the delightful Allagash Smoke and Beards on tap. At $9.50 for a 10 oz pour, it was expensive but delicious.

One of my favorite ways to judge bars is by the quality of their restrooms (you can tell a lot about a place that way). They were unisex, well-kept, large and had great vintage beer magazine wallpaper from floor to ceiling.

If you’re headed to Charleston on a beer vacation, you should definitely stop in to Closed for Business. Their menu is available on line, so you can check the taps before you head over. The staff is friendly and the downtown location and choice of beverages are both outstanding.