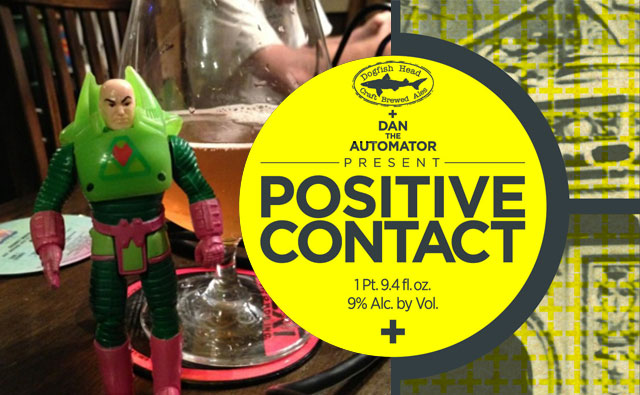 There was a lot of hype surrounding Dogfish Head’s Positive Contact. Originally sold as a six-pack of 22 oz bottles with a 10″ vinyl EP, it was a “party in a box” according to their marketing team. It was definitely an expensive set, and team BDR went in together to split a box.

The record contains several songs from Dan the Automator’s Deltron 3030 project. These vocal-less remixes are high energy hip-hop tracks that would be made all the better if they included verses from Del the Funky Homosapien. The cardboard sleeve is printed with beer-companion recipes from top chefs. You can see unboxing photos at Empty Growler.

The beer itself is interesting and a fitting addition to Dogfish Head’s music series. The off-centered ingredients list of fuji apples, roasted farro, cilantro and cayenne blend together in a very cohesive way, creating an ale that has a champagne-like quality. Effervescent carbonation supports the sweet spiced-apple base and the cayenne provides a succinct flavor cut-off that limits lingering aftertaste. Like some of the Ancient Ales line, this beer blurs the line between styles, if not obliterate it all together. Is it a wine? Is it a beer? Who cares. It’s good stuff.