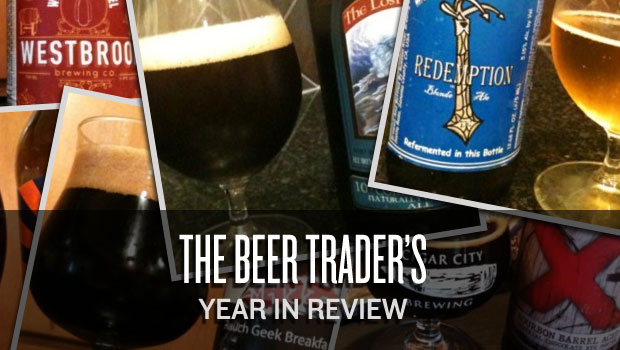 Beer Trading: The Year In Review

I wrote a series of posts about beer trading for Brew / Drink / Run just as we were starting up earlier this year, and now as the year is drawing to a close it got me to thinking: Has it been worth it or not?

I set up my first trade on March 20th and with the holidays fast approaching I am working on what will probably be my last of the year. In that time I have completed 26 trades, not including the one in progress. Thankfully I have not kept a tally of how much I’ve spent, but as I discussed in my earlier trading posts this is not a hobby to get involved with if you have a tight budget. After a rush of trades in the first few months I have found that I am now averaging about one trade per month, but truth be told I am also placing a few too many online purchases as well. Sometimes I think I enjoy the hunt as much as the beer! Since everyone loves a good list, you’ll find one below of the beers I’ve traded for this year. (all of the amazing extras not included!) I can honestly say that I have no regrets about any of the beers I traded away. Except for a couple of CCB Hunahpu’s Stouts and about a six pack of Founders KBS all of my boxes contained fairly common things I put little effort into finding. The hassle won’t be worth reward for some, but this should give you an idea of some of the out of market beers you can acquire with a little effort!

My two favorite things about craft beer and the culture is trying new beers and sharing beer with my fellow beer lovers. I am self admitted “ticker”, I am quite often in search of a new/rare beer to try instead of just keeping the fridge stocked with solid favorites. I would say 70% of the beer I purchase is new to me and 30% is something I’ve tried before. Clearly beer trading benefits this cause. Beer trading certainly has helped with my ability to share rare beer with my friends and family. Sometimes I feel like my “cellar” is full of beers I am waiting to try with my closest beer buddies. I love the feeling that you get when you are able to give someone a glass, or even just a taste, of a rare beer they might never get to try otherwise. I would also like to thank all the people who have brought me bottles and shared beer from their travels throughout the year! Of course dealing with people you don’t know on the internet does add some stress that is unavoidable, but I am happy that all of my trades have gone relativley smooth so far. Overall I would have to say that the beer trading adventure has been worth the effort for me, which is great since there are quite a few more beers to “tick” off my list!