It was a cold morning on 8 March 2011. I had decided that my pants no longer were fitting and I refused to buy a new wardrobe. I went for a run. I had done this before but this time I paid for a race and being kind of a penny pincher, I wanted to be prepared for this event and I knew paying for it would make me keep training. It worked and more than a year later, I am still going. I have set many goals along the way to keep me motivated. I remember saying early on that I have no desire to run a marathon. Well, I must have changed my mind because I did. I did the training (which I did not like so much) and knew I was prepared for the race. What I did find out though is that I was not prepared for the last miles. 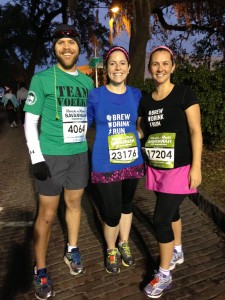 As I waited in my starting corral for my turn to run, I went through the plan for the  race — I wanted to start out slow and work my way up to my race pace of between 8:15 and 8:25 minute miles and then try to keep that pace for the whole race. That would allow me to run at my training pace of a 3 hour 30 minute marathon and allow for slow-downs for water or bathroom breaks if needed and still reach my goal of 3 hours and 45 minutes. As the race began, I was able to keep a relatively good pace for the first 8 miles. I was running behind 2 gentlemen who were running right about my pace so I decided to stay with them. Then, at mile 9, I had to stop for my first bathroom break. This was a quick pit-stop and I was back and running in no time, feeling relieved. It was not long after this that the half-marathon and marathon split started. I remember this being a little motivating for me because I would be the “tough guy” who was going to run the full distance so I know I sped up a little bit. I quickly noticed it and slowed myself down again but I think the damage was done because after 2 miles at the quickened pace I started to feel the fatigue and it was nagging me mentally.

Then, the wheels really started to come off. Somewhere at about mile 17, I started to get a cramping feeling in my gut. I knew what was going on but I did not want to face it. I started looking for a porta-john and found one — with no toilet-paper in it. It was not until mile 21 that I found one. I stopped in and did my business and was on my way. Luckily, this is also about where my sister, my brother-in-law, Lee, Raymond and Ashley, as well as the kids were standing by to cheer me on. This was a great motivator and might have pushed me through mile 22 on adrenaline alone because immediately after that, I hit a small wall that seemed to show up and trip me up the rest of the way. I remember walking seemingly more than I was running. I was dejected and disappointed but I knew the quicker I got to the finish, the quicker I could stop so I knew I had to run. 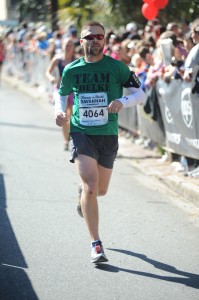 Once I crossed back into the area where the marathoners split off 12 miles earlier, I started running again for good. I remember thinking to myself that there was only 1.2 miles to go and that is such a short distance for me but this was the LONGEST 1.2 miles I think I ever ran. I finally rounded the corner and was heading to the finish line. I caught a quick glimpse of Ginger and Nicole who were waiting for me after they finished their half-marathons and pushed on to the finish. I did not meet my goal of 3 hours and 45 minutes but I only missed it by 5.5 minutes so I am totally satisfied. However, I have much respect for those out there that do this on a regular basis. Here it is a week later and my legs still hurt and I get a little nauseous each time I run a little more than 2 miles. Hopefully it will go away over time as I rack up more miles on the runstreak and work toward my next goal of finishing the Critz Tybee Run Fest stronger than last year. The 5k and 10K were great but I fell apart at about mile 9 in the Half and never really recovered.

And just for the record, I said I never wanted to do this race again either. The green shirt is post marathon and the blue shirt is right before the 1 mile run for the run fest.  There is something oddly familiar about these two images. 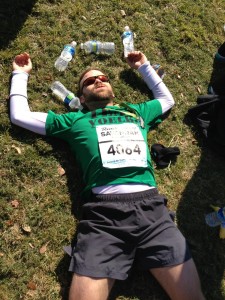 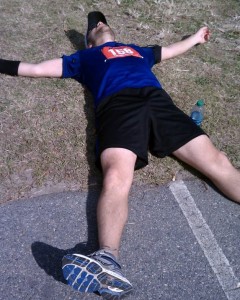