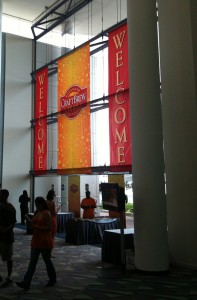 The Savannah Craft Brew Festival begins in earnest on Friday night. Things kick off with the International Food and Brew Tasting. Held at the Westin Savannah Harbor Golf Resort & Spa, the International tasting features beer from around the world including. This isn’t just European beer either. Beers from Ethiopia, Guatemala, Kenya and Vietnam were on the menu this year. The event “recognizes the impact that Old World and other international brewers have on American beers.”

The main event is held on Saturday. This is the Grand Tasting. The Grand Tasting is held in the Savannah International Trade & Convention Center which is adjacent to the Westin on Hutchinson Island across the river from downtown Savannah. Don’t let the location’s “island” designation fool you. The Festival is easily accessible from downtown by car and the (free) city operated ferry service. This convenient service makes it easy to stay in town for the weekend, eliminates the need for a designated driver and lets you avoid the $5.00 parking fee.

With over 130 breweries represented at the 2012 Festival there was a lot of beer to be tasted and a lot of territory to cover. The 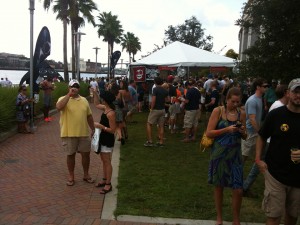 Festival was separated into two main sections, one is outside on the river, the other inside the Trade Center. The most festive of the two section included the largest grouping of booths. With music playing and the view of downtown Savannah across the river the outside section felt like the place to be. I’m a fan of local beers and Georgia was well represented at the Festival so I headed to Terrapin booth to start with some old favorites and sample this years Pumpkinfest. The second Georgia Brewery I dropped by was Sweetwater Brewing for a taste of LowRYEder IPA, always a good “go to” beer.  Another Georgia brewery I stopped at was Wild Heaven, one I had not had the opportunity to try before. I came away having enjoyed their Belgian Strong Pale Ale, Invocation. Abita is a long time favorite of mine so I stopped in for a sample of 18th Star Bière de Garde. The list of breweries is far to long to go through here but needless to say there were quite a few with plenty of variety, and that was just on the outside section. 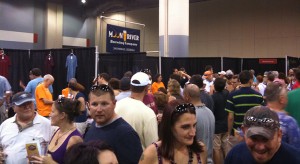 The indoor section of the festival was an oasis from what turned out to be a pretty warm Labor Day in Savannah. The air-conditioning was on and, though smaller than the outdoor section, there was still a nice variety of breweries to choose from. The VIP section was located indoors as were were the booths for DogFish Head, Victory Brewing, Blue Point, Allagash and Highland Brewing among others.  I searched out a few of the breweries I had not tasted before which included Green Flash and their Belgian Pale Ale. I was excited to see Blue Point and thoroughly enjoyed their RastafaRye Ale. Savannah’s own Moon River Brewing was represented. They were serving the very unusual but interesting Rose Petal IPA. It should be noted that one of the most popular booths was Frozen Pints and their beer flavored ice creams.

I wasn’t able to attend Sunday’s Rhythm and Brews concert featuring Sister Hazel but feel the additional day is a nice way to round out the weekend and lead into the Labor Day holiday.

I’m very impressed with what the Savannah Craft Brew Festival has put together. The festival brought in several breweries we don’t always see here in Savannah all packaged together into a solid weekend or activities that has turned into a good weeks worth of events. It’s a festival worth traveling to Savannah for and for us craft beer loving Savannah residents a great event to have in our own backyard. 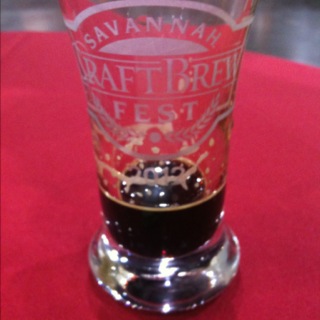