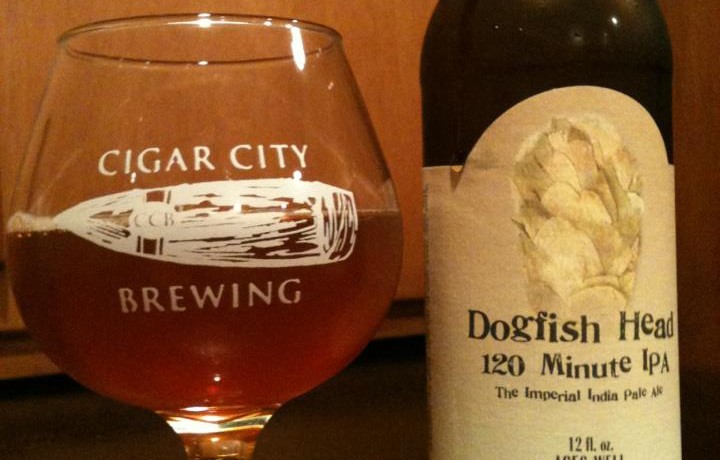 Dogfish Head 120 Minute is an American Double/Imperial IPA. This is the 2012 vintage so it’s relatively fresh. Huge thanks to my friend Paul, owner the Your Pie locations here in Savannah, for giving this to me. Now I can age the bottle I got in a trade for a while and have a good point of reference as to what time does to it.

From the DFH website: Too extreme to be called beer? 120 Minute IPA is brewed to a colossal 45-degree plato, boiled for a full two hours while being continuously hopped with high-alpha American hops, then dry-hopped daily in the fermenter for a month and aged for another month on whole-leaf hops! This aroma is of maple syrup and boozy cognac. I’m also getting a lot of sweet syrupy cognac in the taste. It is a lot more subtle than I though it would be, but there is still a lot of big dense flavors of earthy hops. This is followed by a lot of alcohol heat and taste. (This DIPA comes in somewhere between 15% and 20% ABV!)

This extreme IPA comes very close to the “is it a beer at all?” line, and is one of the more polarizing craft beers out there. Some people drink this fresh and find it awful, some can’t get enough of it on the fresh side. Others swear that years of age will turn this into a barleywine, while others argue no amount of age will ever change a beers style. No matter where you stand it is definitely an intense sipper to be shared with others. Worth a try at least once, as for me I rather enjoyed it and I am looking forward to trying it again with a few years on it. 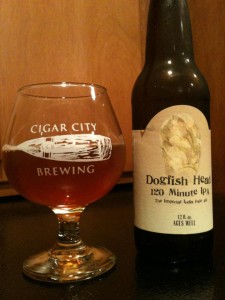