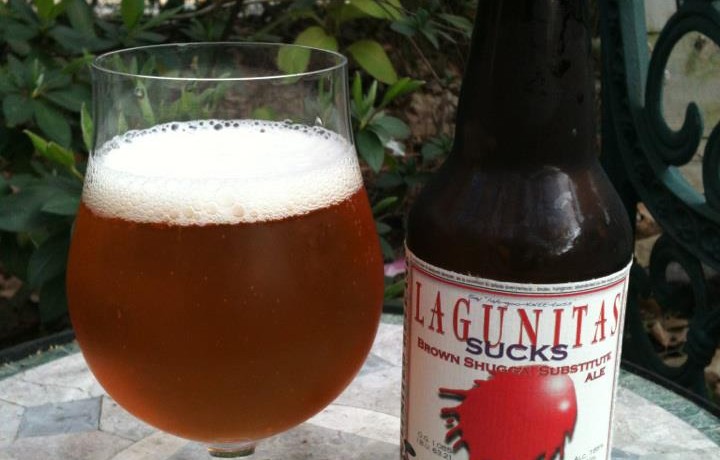 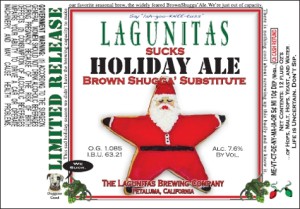 Lagunitas Sucks is an American IPA with an interesting story, and it all starts with the release of a different beer entirely. Lagunitas released Brown Shugga in 2010. It is an American Strong Ale with a nice light body, mild brown sugar & tropical fruit sweetness, a good bit of tropical hop bitterness and a whole lot of boozy kick! Lagunitas fans went crazy for it, almost immediately clamoring for more. Unfortunately the next year due to brewery expansion they were not able to produce Brown Shugga, but in it’s place Lagunitas Sucks Holiday Ale (hence the odd name) was born. Funny thing is people went maybe even more nuts for the replacement beer! So now in 2012 we were all lucky enough to get both Brown Shugga AND Sucks, a trend that I hope continues.

What is the beer like you ask? Lagunitas Sucks is nice and hoppy this year, with tropical fruit flavors (mostly pineapple) and a powerfully bitter grapefruit and resin finish. The sweet malts are in good proportion balancing the beer. It reminds me of Bell’s Hopslam in a lot of ways (not quite as good though) but much easier to acquire, and as with most Lagunitas beer the price is right! 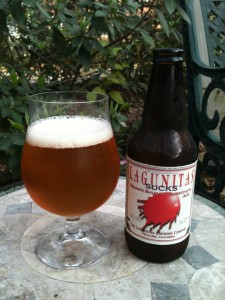