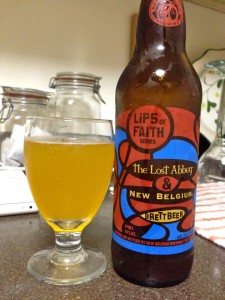 The second wild ale collaboration between The Lost Abbey and New Belgium, Brett Beer is a welcome addition to the Lips of Faith series. The yeast and hop decisions bring a wonderful, bright tart citrus nose to this beer, which has a body similar to a Belgian golden ale. That  straw color is cloudier than many goldens and takes on some characteristics similar to wheat beers. Where Keith found apple and pears in the previous experiment, Mo Betta Bretta, grapefruit and pineapple was up front for me in this offering. While grapefruit can often be an overpowering and tart choice, it was tempered with a strong sugar/honey sweet component that created a nice balance and allowed the citrus to be refreshing without the additional expected sour note.

As expected, the yeast is the star of the show. The brettanomyces are what allows that fruit flavor to flourish, ever so slightly toned by the Sorachi hops. The carbonation was active with a lively head and continued fizzing on the tongue.

This is not a complex beer, as many American wild ales tend to exhibit layers of odd flavor combinations struggling against each other. Instead, this is a highly drinkable, relatable and solid choice for a refreshing ale with more character than a wheat beer but less intense than a mild sour. Get it while you can.