On podcast 16 (coming soon) Lee, Raymond and I sat down to do a side by side tasting of Cigar City Brewing Hunahpu’s Imperial Stout, vintages 2012 & 2013. One of the best parts of loving craft beer is being able to share it with others, it was a lot of fun to hear Raymond’s reaction to trying this for the first time! Huanhpu’s is an Imperial Stout aged on Cacao Nibs, Madagascar Vanilla Beans, Ancho Chilis, Pasilla Chilis and Cinnamon. It is brewed, barrel aged, then bottled and released only once a year. It is only available for purchase at the brewery at Hunahpu’s Day, making this a fairly rare and sought after beer. 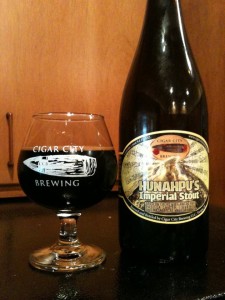 2012 Vintage: I am having this fresh for the first time (well technically I had it at the festival for the first time) less than a month after its release. One sniff and you know you are in for a treat, lots of roast and smokiness is mixing with the chili spices. The taste starts with rich dark chocolate, dry (slightly burnt) roasted malts, subtle chili spice/heat, vanilla, a slight bit of wood/smoke, and a touch of hops. So good! I now see why the is so highly sought after, it is pretty much perfect. Not the kind of beer you want to quaff all day, or even have more than a few times a year, but this is the kind of brewing masterpiece that will make a special occasion that more special.  Aged one year. The vanilla has faded a bit for me, while the chocolate is a bit amped up and has more of a milk chocolate taste instead of dark. I expected the chili to fade, and it certainly did, but I am totally shocked at how intense the cinnamon still is. I was under the impression that this really wouldn’t age very well, but it has aged so much better than I ever expected. I think I was expecting the individual flavors to fade and for the stout to become more muddled. In fact some of the individual flavors have changed or faded, but they have retained their integrity. That strong cinnamon… I am still shocked at how strong that still is. 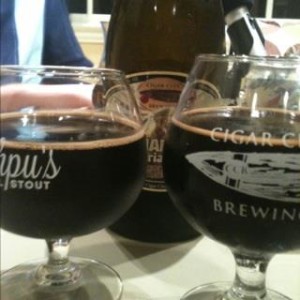 2013 Vintage: Essentially this is tasting pretty much the same as I remembered from last year, and honestly it is almost impossible to assume that I could remember exactly what I tasted a year ago. (even with notes) That said I feel like there are a few differences. I’m getting more vanilla upfront in the 2013, with the rich dark chocolate flavors I experienced last year taking a back seat. Like before there a lots of slightly burnt malts with a mild char, a bit of dry oak, and the subtle chili spice that brings all of this together. I didn’t note a hint of coffee last year but I detected some in the 2013 version. None of the different things I’m tasting make this any better or worse, this beer is still tied with a select few beers at the top of my all time best beers list. Simply amazing.  Aged one year. ????