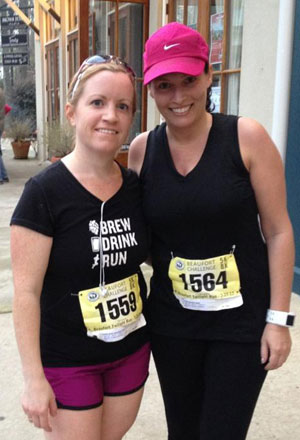 This weekend was the fifth annual Beaufort Twilight Run (website) in Beaufort, SC. The BTR takes place each year in Habersham Village, a picturesque neighborhood right along the Broad River and benefits the Riverview Charter School. Habersham Village has a cute town center with shops and restaurants and a park. The Beaufort Twilight Run starts with a kids run and then is followed by a 5K and 8K. This year, they offered the option of the Beaufort Challenge, which was the combination of the two races. The BTR is very family friendly and is followed by an oyster roast where they have a live band and great food. For the racer that would prefer an alternative to his or her one free Budweiser or Michelob Ultra at the end of the race, the Pizza place in the village also had four New Belgium beers on tap for $3. This race was especially significant to me this year because, last year, it was my very first official race.

My road to running probably started in a similar fashion to a lot of people. I realized that as I was nearing my 40’s, and as my daughter reached her 2nd birthday, having a baby was becoming a more and more lame excuse for my being overweight and inactive. Lucky for me, in early 2011, my work place decided to have a Biggest Loser weight loss challenge. Also, lucky for me, I had a friend at work in a similar situation. Jenna and I needed to lose around the same amount of weight, we were very similar in size and we were both very motivated and kept each other in check.

I started, like a lot of people, on the elliptical machine. We were lucky enough to have these at work, so I would change my clothes right after school and get on the machine immediately. I did it every single weekday including Friday. I watched everything I ate using the LoseIt app, and I saw pounds drop off. When summer came and I no longer had an elliptical machine to use, I started doing the Jillian Michaels workouts on OnDemand. I started with the 20 minute workouts which, at first, even after months of using the elliptical, almost made me throw up. I then moved up to the 45 minute workouts. When we returned to school in the fall of 2011, my friend Jenna and I started the infamous Insanity workouts after school in my classroom each day. This was the hardest I had ever worked out in my life and I loved the feeling of accomplishment every day when we would be finished with our workout.

Until the fall of 2011, I would have claimed to be unable to run. I hated it with a passion. However, when I started doing Insanity and surviving it, I decided that I should be able to run. At first, I tried it on the treadmill, but then I started breaking the monotony of the indoor workouts with getting outside during the nice fall weather. By Thanksgiving Day 2011, I did the informal Turkey Trot which is about 2.25 miles around Grant Park in Atlanta with my uncles Gene and JOJO. I felt such an accomplishment keeping up with them. By Christmas, JOJO and I ran a 3 mile run without stopping. I had a horrible headache afterwards, but I realized I could do it. 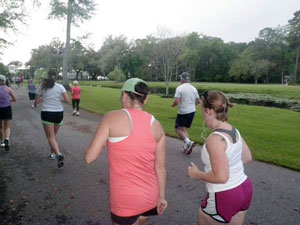 So by early 2012, my friend Jenna talked me into signing up for The Beaufort Twilight Run. I signed up for the 8K instead of the 5K. I had already proved to myself that I could run 3 miles, so why not kick it up to 5? I was regularly running 3 miles by this point, so, a week or two before the race, I ran 5 miles just to see if I was going to be able to make it. Again, I had a terrible headache and thought I was going to throw up, but I made it. So the day of the race, I made the 5 miles without stopping and felt great about the accomplishment even though I was probably last in my age group.

This year, again thanks to Jenna, I signed up for the Beaufort Challenge at the BTR and again to do something I had never done before: run 8 miles. Since last year’s race, I have run a couple of 10K’s including the Savannah Bridge Run, so I reasoned that if I could run 6.2 with crossing the bridge twice, I could run 8 miles. This time, I didn’t try the 8 miles until the race day. I had every intention of getting there first, but it just didn’t happen. My regular runs had increased to including 5 miles runs at this point, but I really didn’t know what it was going to be like to run a 5K, stop for a few minutes and then run 8K more. 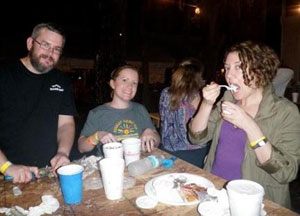 The 5K was great (besides having to dodge a lot of kids who would dash in front of us and then stop running). My time was good, I felt good, and even did the sprint at the end. I felt good about starting the second race and was ready to go farther. However, when the second race started, it was clear that my legs didn’t expect to have to work like that again. It surprised me that it took me about a mile to warm up again. After I got going, I was careful about not going too fast knowing that I still had a long way to go, but still by the fourth mile, my legs were really hurting. I was doing fine with the cardiovascular part, but I had to start changing my running position and to keep my mind completely focused on finishing and continuing to run no matter how badly my legs were hurting. When I finished, I was once again, proud to have proven to myself that I could do something that I had never done before. Much to my surprise, I was not sore on Sunday morning though my legs were very sore for the rest of the night on Saturday.

One of the biggest accomplishments about this race for me was that I felt very similar during the 8K to how I felt last year, but after already completing a 5K. I could have never done this a year ago, and two years ago, I would have laughed hysterically if you suggested I should run even one mile. And while I can’t even believe it is crossing my mind, this experience has even made me think that a half-marathon might actually be within the realm of possibility. I didn’t know how much fun it would be to revisit a race again a year later and see how much improvement I had made over the last year. Barring unforeseen events, I’m sure you will find me at the BTR next year; it is a fun race in a beautiful environment. I look forward to continuing to let this race be my yearly benchmark to gauge my improvement.

Emily Dion is a mother to one little girl, two cats and and a dog. Unlike most people, she actually loves teenagers and chooses to spend her days as a high school teacher. She enjoys running, singing, and drinking beer (always out of the proper glassware) with her dashing “beer-ninja” husband.