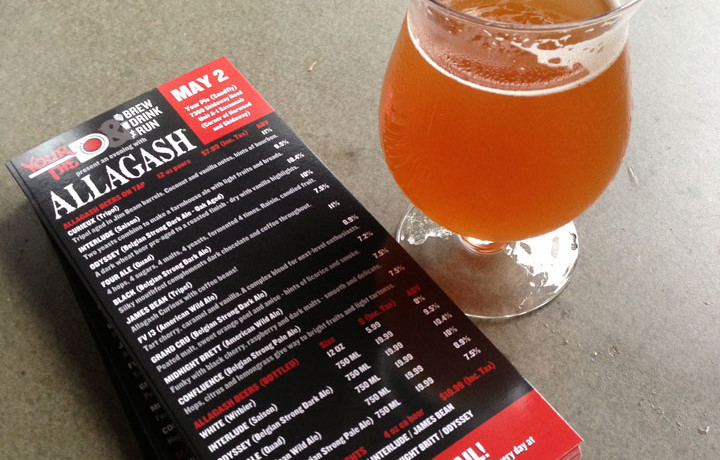 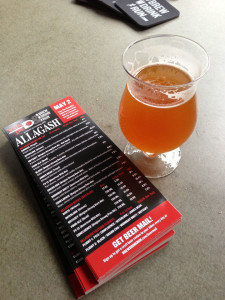 At the Brew / Drink / Run sponsored Allagash Brewing Co. tap takeover at Your Pie [more info], we had the chance to try James Bean on tap. The first thing that jumps out at you is the name. Yes, this is a tribute of sorts to Jim Beam, the bourbon label. You see, Allagash’s excellent Curieux tripel is aged in Jim Beam barrels and that is the base beer for James Bean. On paper, Bean is simply the Curieux with the addition of cold press coffee.

In actuality, the beer is much more complicated than it sounds. Curieux is itself a complex selection. From our review:

The bourbon adds a lot of vanilla, a touch of caramel, along with a good bit of bourbon flavor.

Those are not tasting notes you expect to see in a tripel. With the cold press addition from Matt’s Wood Roasted Organic Coffee this beer transforms into something else entirely. A light bodied beer with barrel aging is one thing; but coffee is a complete 180 from traditional beer logic. Somehow, it works. The coffee is very much up front, morphing the Curieux into a thin Irish coffee-like experience. The vanilla and sweet alcohol are still there. However, they are a back-seat aftertaste to the crisp coffee bitterness and roasted bean flavors. The chill of a cool draft adds to the otherworldliness of this beer, making the coffee flavors brighter and enhancing the sweetness. As it warms, the lovely Belgian yeast becomes more prevalent, adding yet another untraditional complement to the well balanced coffee profile.

This may not be your traditional tripel; but James Bean is an excellent varient for fans of the unconventional. James Bean is currently a draft-only beer from Allagash and was first released in January 2013.