Out Of The Cellar: A Beginner’s Guide To Aging Beer 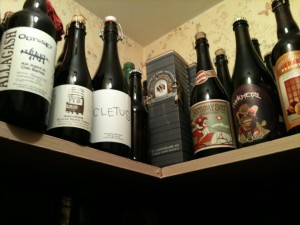 A look up into Keith’s beer cellar

Sometimes I forget that I am WAY more involved in craft beer than the average person. The reminder always comes when I talk to someone at the bar about a beer being much better with a year or two on it. Quite often their head cocks slightly to the right or left and the expression on their face reads “Why wouldn’t you just drink it?” It got me to thinking that a little write up about aging or cellaring beer might be a helpful thing.

Let me start by saying, I am no expert on the subject. I have been aging beer for a couple of years now, and am learning new things all the time myself. This is designed for those people who have little to no experience aging beer. For the most part, you want to start with higher ABV beers (8% and up) and bigger beer styles (Stouts, Barleywines, American Strong Ales, Belgian Quads etc.) but there are exceptions to the rule. I will touch on some of those in a bit. At the end of the day, aging any style of beer won’t make it go bad, but it might make it taste bad.

Why Start a Beer Cellar?

I have people ask me fairly often, “Why would I want to age a beer?”, which is a great question. There are two common reasons to age a beer. The first is to dull the alcohol taste or heat (aging will not lower the ABV). The second is to mellow hop flavor and bitterness. This tends to bring out a bigger malt profile and sweetness in many beers. It is also fun to see how a beer changes and develops over time. What flavors fade? What new flavors appear?

What Not To Age

Generally speaking I would say avoid aging these beers and drink them as fresh as possible.

These are the kinds of beers you want to put aside for another day. 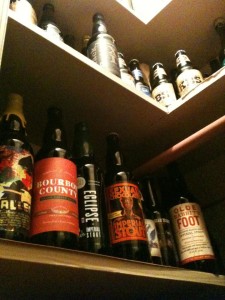 Waiting is hard, you guys.

To get started, all you need is a cellar and some patience!

Of course not everyone has a literal cellar to store their beer in, and some guys get so into it that they buy or have fridges built just for their beer! For the most part you just need a relatively cool and dark place to stick your beer until it is ready to drink. My cellar consists of most of the flat space in my bedroom closet. As for the beer itself, I will suggest starting small. Age a few things and get a feel for the hobby.

The first beer I aged was Sierra Nevada Bigfoot. It’s an outstanding barleywine that is easy to find and readily available each year. When Bigfoot is released, buy yourself a 4 pack and drink one. Then put the other 3 aside for a year. When it comes out the next year buy another 4 pack and do a side by side tasting. This will help you taste what happens with age. Do the same thing with a favorite stout, quad, or whatever you like. Eventually you will figure out the sweet spot on all of your favorite beers. For example, after doing some aging experimentation I know that I really like Founders Imperial Stout at about 6 months old. As your cellar starts to grow, I will suggest using the website Cellar HQ, it is an easy and fun way to keep track of your beer cellar.

So get out there and pick up some great beer.. and don’t drink it! At least not for a few months. Cheers!