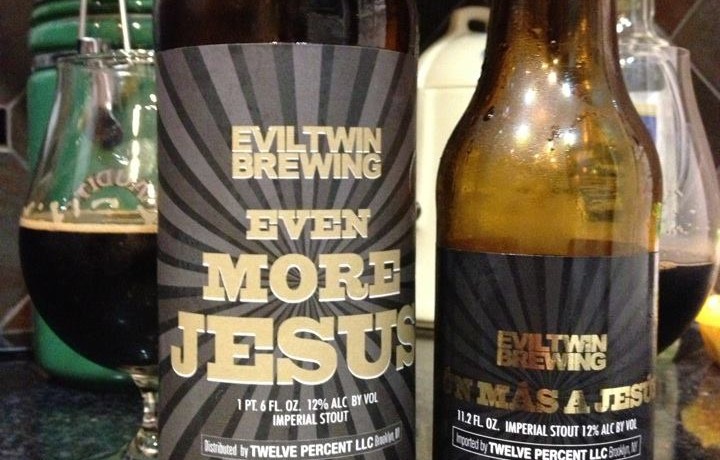 For podcast 21 Lee, Allen and I had an extremely interesting side by side tasting of Evil Twin Even More Jesus and Aún Más A Jesús. We wanted to figure out if these were the same beer brewed in different places, or if this were two totally different beers. As best as I can remember, we settled on the following “conclusion”: this is probably the same recipe brewed at the two locations with a few possible variables accounting for the differences in the beers. The first would be age. We have no idea exactly when these beers were bottled since there is no bottle date, and we all know that age can change a beer quite a bit. The second would be availability of ingredients. I am willing to bet there were some substitutions made when this was made the second time. These beers were very similar in a lot of ways and it was difficult to find the differences at first, but as we got into them it became apparent how different they actually were.

American Imperial/Double Stout. Brewed at Westbrook, Mt. Pleasant SC. This is one BIG beer, and I don’t just mean the 12% ABV. Complex is a word that gets thrown around in beer reviews a lot, but this one really is. Thank…well, Jesus that I shared this with others. Without a doubt one of the few 22 oz beers out there that I am confident I could not have finished on my own. The mouth-feel of this beer is very thick and chewy. Getting lots of char and roasted malts, chocolate, vanilla, molasses, booze and a very dry finish. There was a flavor in this that I could not quite place and as it warmed it finally came to me… licorice, not my favorite flavor in a stout. I am very glad I got to try this. 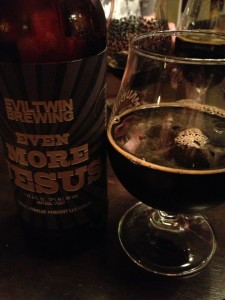 American Imperial/Double Stout. Brewed at Companyia Cervesera del Montseny, Spain. Once again a complex beer with flavors of chocolate, roast, and what seems like a bit of chili spice. There is zero indication that this actually brewed with a chili spice of any kind, but I still taste it there. That “spice” flavor is really making this for me too, breaking up some of those intense flavors and adding a bit of balance. A good bit thinner, I really wish I could take the mouth-feel of Even More Jesus and somehow stick it on this beer. Overall I would have to say that I prefer this one. 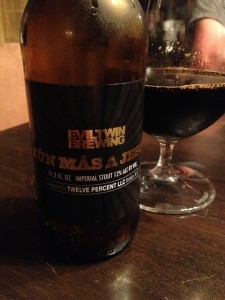