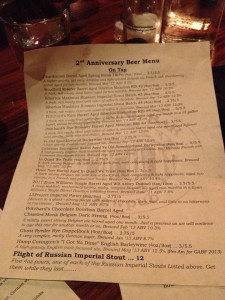 This year our summer family vacation was a big one. We packed up the new car and headed to the midwest. My wife, Emily, and I decided it was worth it for me to take an extra week off to relax a bit and really enjoy it. Once our route and stops were mapped out I started doing a good bit of research on where my beer destinations would be. Funny thing is the first great experience wasn’t one that was planned at all.

Day one of our vacation started on Father’s Day, just a simple travel day to Atlanta to drop off the dog with family and get a good nights sleep before heading to Asheville, NC for a couple of days. When it came time for dinner Emily suggested The Wrecking Bar. I had been there a few times before, always in the early afternoon for a quick beer and maybe some light bites. I was definitely interested in tasting some of there other food, and the beer is of course solid, so it didn’t take much to convince me. Upon our arrival we found it pretty crowded for a Sunday. After we got our names on the wait list we headed to the bar for a drink. Looking at the draft board I could tell right away this was not a normal night. There was about three times as many beers available as normal, and there was another special beer menu that was handed to us. What the heck was going on? It turns out they were celebrating their 2nd Anniversary! What luck to happen in on the place when there was a ton of exciting beers to try. I sensed that my good night’s rest was suddenly in jeopardy! I ordered a 2011 Evan Williams Single Barrel Aged WB Abbey Dubbel and headed back out side to wait.

The Wrecking Bar is located in a beautiful old building in the Little Five Points area of Atlanta. I had passed their big columns many times when I lived there and it has served as a 20th-century Victorian-style home, a Methodist Protestant church, a dance school and most recently as the Wrecking Bar architectural antiques store. (visit the website to read a more extensive history of this beautiful building) The bar itself is down the hill in the lower level. Outside is a small modern patio, but inside is a perfectly dark and and cool basement restaurant and bar with low ceilings and amazing exposed brick walls. The walls look like limestone, but I am honestly not knowledgable enough to say if that is actually true. On this night the place was packed and there was a very talented jazz trio in the back corner who played several sets while we were there. Beers in hand, I found my family waiting in a warehouse like building behind the patio. The door was open and it turns out this is where at least some of the beer is made. There was also a long bar set up in a taproom fashion. Several of the beers being served were coming from this room and employees zipped by periodically to pour tulips of beer. As I wandered around I was able to get a glimpse of some of the barrels probably used to age some of the beers being served, as well as a peek down into the basement where the brewing tanks are. Before long we were at our table for a pleasant meal.

I should tell you a little about the food at this point, but to be honest I was too excited about the beer to pay much attention to anything else! I ordered a fish entree which was tasty if not a little thin on the portion size. I don’t know what the hell anyone else ate… Back to the beer! They were offering a flight of five 4oz. pours of their Siberius Maximus Russian Imperial Stout for $12. Each one was a different vintage or variant. Even though I am not a huge fan of flights I was all over this one: Batch #3 (brewed September ’12), Batch #4 (brewed March ’13), Batch #2 aged in Woodford Reserve Barrels (brewed April ’12), Batch #4 aged in Pritchard’s Rum Barrels. The clear winner of the bunch was the final variant which was the Pritchard’s Rye Whisky Barrel aged Mexican RIS. This was batch #4 barrel aged one month and infused with vanilla, cocoa nibs and chilies. The best beer of the night however was the L5Project Imperial Porter. (Please follow this link to read my full review) I could not resist just one more beer at the end of the night, and after taking a sip of this earlier in the night I knew I had to have one. I ordered a small pour of this, but our server brought me a full pour with a knowing nod. He knew why I was really there.