The Trybee Island Sprint Triathlon was my first “destination” race of the 2013 season.  The family and I packed up the van and invaded Brew/Drink/Run East for the weekend.  We arrived on Friday and were shown an awesome time by Lee and family both Friday night and Saturday.  I also was surprised by Lee telling me he was planning to head over to Tybee Island for the race Sunday morning as a spectator/supporter/photographer.  That was huge because my wakeup call Sunday morning was 3:30 in the morning with departure for the island after the pre-race breakfast of 4:30.  I was stoked to have one of my oldest friends along for the ride and race.  The remainder of the families planned to meet us on the beach after they woke up, well after the race was completed.

The Trybee Sprint is managed by a well known Triathlon event company called Setup Events.  They run multiple triathlon series throughout the Southern US with races of all possible distances and are generally well respected for running good events in triathlon circles.  The Trybee race was advertised to be a 750 meter with current swim in the ocean, a 20k bike ride to Fort Pulaski and back, and then a 5k through the residential streets on Tybee.  Flat and fast was what I was expecting.  The race also helped to support the Tybee Island Marine Science Center.

Lee and I arrived at 5:15 am for packet pick up at the Ocean Plaza Beach Resort as one of the first competitors to arrive.  I’ve learned to show up early to give me time to set up transition, stake out a good spot in transition if they are not pre-assigned (this race had numbered racks but you could choose where you were on the rack.  Thus I chose the place on the rack closest to the exit since it would minimize my time getting in and out of the transition zone), walk through the transition a couple of time to visualize where I need to go, and warm up.  Packet pickup and body marking went without a hitch except that they were short on volunteers at that point since it was still early.  Another reason to get there first!

Lee was not allowed in transition since he was not competing (This is the sign of a good race.  This protects expensive bikes and other equipment from theft and damage) but he hung around the outer fence nearby as I got set up.  We walked down to the beach to look at the swim and I noticed something new to me: The buoys for the swim course were not in the water yet.  I was nervous about this swim since it would be my first race in the ocean.  We headed back to transition when an announcement was made over the loudspeakers. The current had changed directions and the swim was now going to be into the current but they were shortening the swim from 750 meters to about 550 to try and make up the time difference.  This hit me like a ton of bricks.  The swim is the weakest part of my races.  I am a confident but very average swimmer.  I knew that swimming into the current would slow down the slower swimmers more than the faster ones.  Looking around, I couldn’t understand why they wouldn’t just turn the swim around, swim through the pier, or make some kind of course change to keep the swim with the current as advertised. 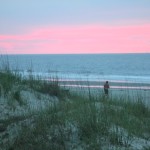 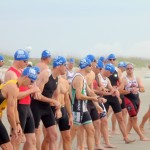 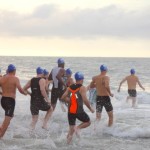 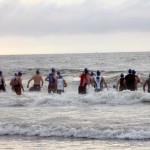 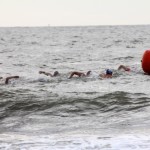 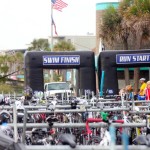 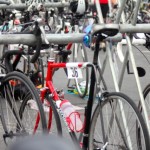 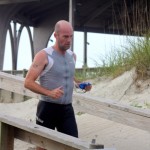 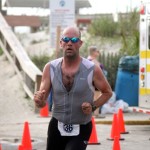 Regardless, the time came and we headed out to the beach to start the swim.  I was in the first wave into the water (based on age and gender, not speed) and off we went.  I learned two things pretty quick: 1) swimming out against the waves is hard and 2) swimming perpendicular to the waves made it hard to stay on course.  I made it around the first turn eventually and as I passed some of the other sighting buoys I saw that I was paddling hard but not making nearly as much progress as I thought I should have been making.  Eventually, I made it to the turn for shore and noticed one of the lifeguards trying in vain to pull the turn buoy back out to sea.  The waves had been so strong it had been pushed in toward shore.  Glad I was done with that!

I passed a couple of people on the run up the beach and board walk to transition and got on my bike.  The bike ride to the fort was uneventful and I passed more people than I was passed by.  As I neared the fort I saw the leaders coming back the other way so I figured I was doing ok.  As I headed back, vehicle traffic going to the island for the day had really picked up but since most of the route is four lanes the vehicles stayed to the left.  As we made the turn from 1st Street onto Butler Avenue there was a bad head wind so that cost me some time.  I caught a couple more guys just before transition and got in for the run.

I was really looking forward to hammering this run course.  I have not run a flat run course in a while but knew that with a hill to climb, I would be aiming for 21 minutes for the 5k.  I was so ready to go I really took off out of transition and 30 seconds in realized I had forgotten my race number.  I knew my time may not be counted without it so I turned around, ran back into transition, grabbed my number, and ran back out.  I made great time on the run, passing many local people Lee had recognized as strong runners before the race.  I didn’t have any other racers around me as I made the turn for home so it was hard to really push to the finish.  However, I got through and saw the final time of 1:14:29.  The turnaround on the run had cost me a full minute but other than that I felt I had really had a strong race.

We decided to hang around and see if I placed in my age group since you just never really know in a race like this.  I’ve only placed in one triathlon but since you don’t know who is racing against you, I figure it wouldn’t hurt.  Plus, our families had not left Savannah yet for the island so we had time to kill.  Contrary to most races, they announced the age group winners starting with the oldest racers and taking breaks for door prizes.  Finally, they got to my age group and they announced the time for 3rd place as something like 1:07.  What a strong field for the 35-39 age group!

We packed up and headed to the beach by the lighthouse to wait on the rest of the families to arrive.  We had a great day on the beach and I enjoyed many celebratory and well earned beers (Back in Black and Tybee Island Blonde to be specific).  Later that night we cooked shrimp and recorded a podcast with Keith.  We were not happy to have to leave the next day but packed up and headed back to Atlanta.

All in all I would highly recommend the Trybee Island Triathlon.  The swim against the current made me mad but it was a testament to Setup Events that they sent an email to every participant after the race asking what we think they should have done with the swim.  They explained that swimming through or around the pier was not a possibility for safety reasons, which I respect.  I had a great time and did well, for me.  Ultimately, that’s what important.  It was a great weekend and I can’t wait to do it again.  All of it, even the family invasion.