Our next stop this summer was to Bell’s Eccentric Cafe. It is located at the original Bell’s brewing facility in Kalamazoo MI. Most of the beer is now brewed in a new facility in Comstock MI. I was very excited to learn that Kalamazoo was only a hour away from where we were staying in Michigan, so a day trip was in order. Most of the time it’s just Emily and I, sometimes with our daughter, on our brewery visits. For this trip we invited my brother-in-law and his wife and daughter to come with us. It is always fun to turn people on to new beers, and as best I could tell they had a great time. As for me, Bell’s is one of my favorite craft breweries so I’ve had this trip on the brain for a while.

The cafe itself is set up very well. The bar space is pretty small (in fact they had some taps set up somewhere in the back) leaving quite a bit of room for tables and patrons. The walls are covered with a lot of the stuff you might expect in a midwest bar, most of it relating to beer, the region or Bell’s specifically. We got there just during the lunch rush on a Tuesday and I quickly focused on the large draft board to choose my first beer. It ended up being the Uberon, which is an amped up & barrel aged version of Oberon I was really wanting to try. It took us a few minutes to figure out the ordering system in place, which was a wait in line, place order, pick up beer/food system. With two little girls in tow a wait staff would have been nice, but in the end it wasn’t a hassle to do things the way it was set up. 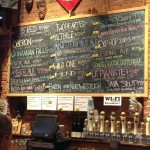 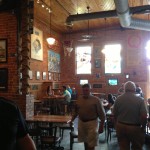 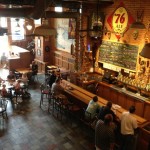 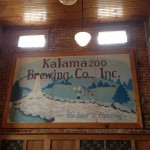 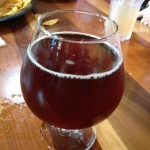 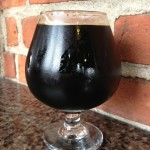 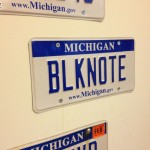 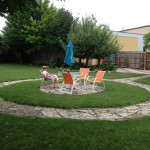 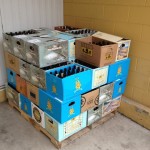 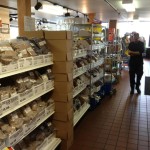 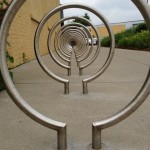 Before I go on to talk about the other beers I got to try I want to praise the food available here. It was quite frankly some of the best bar food I’ve ever had. I opted for the BBQ Tofu Sandwich, while both of my girls had the Black Bean Wrap. Both were outstanding. Nothing too complicated, just quality ingredients and flavors. The BBQ Tofu Sandwich (Marinated tofu on a MacKenzies’ Bakery onion bun with an avocado cream spread, Muenster cheese, pineapple salsa, Porter BBQ sauce and lettuce) was one of the best I’ve had. Great sauce and the pineapple salsa was the perfect final touch. The Black Bean Wrap was also simple but delicious (Kirklin Farms black beans wrapped in a flour tortilla with pico de gallo, avocado cream spread, shredded cheese and Spanish rice, served with corn chips and Sriracha sour cream), with the perfect amount of cheese melted inside. There is something about too little or too much cheese in a wrap, but this one nailed it. I have to say I was feeling a bit envious of the locals who get to eat here all the time!

Back to the beer though… My second round was a “short” pour of Wild One. All of the short pours seemed about 3 to 4 oz above the listed amounts. When I asked the bartender if that was really the proper pour she said something to the effect of “Well, yeah pretty much, you know.” You could her the wink in her voice and I fell in love with the place a little more. Wild One is an American Wild Ale that is a blend of brown ale and wheat wort aged in oak wine barrels. This is a super solid sour that’s not over the top so it’s still pretty easy to drink. It reminded me a lot of New Belgium La Folie. My last round was a Dagger Stout (again a not so short pour) which I shared with Emily. I thought this was very good as well, it tasted like a super roasty less licorice version of Expedition Stout. Got lots of roast, chocolate, a bit of dark fruit with a nice dry finsh. If this was available in 4 or 6 packs at home I would be all over it! We finished our last round outside by the pretty outdoor stage area to let the kids run off a bit of pent up energy.

Our final stop was the general store located in front of the cafe. They sold just about every type of Bell’s stuff you could imagine: Glassware, T-shirts, stickers, homebrew supplies and beer by the case, six pack and 22 oz bottle. I was able to pick up some Kalamazoo IPA which is only available in that county.

Probably the best visit we had on this year’s vacation, I would strongly suggest stopping at Bell’s Eccentric Cafe for a meal and a few beers if you are in the area!