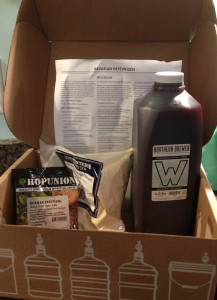 A few weeks ago I decided to brew up a light, easy beer to last me through the rest of Savannah’s long summer. My favorite style that matches up with that description is a hefeweizen. I had never tried cooking up a recipe an example of the style so I thought it would be a great beer to go with. Even better, hefeweizens require minimal ingredients and are, by my research, pretty easy to brew. The short turnaround for this beer time meant I could tap into this beer quickly.

As always I did some research, thinking I’d order the recipe ingredients individually, but ultimately decided to go with the Bavarian Hefeweizen Extract Kit from Northern Brewing. The price for the kit was right in line with the price for individual ingredients and the ease of organized kit appealed to my laziness. The only adjustment I made was to upgrade the kit to include the Wyeast Weihenstaphan Wheat yeast.

All indications were that this was a super easy beer to brew. I, however, excel in messing up even the simplest things and this kit was no exception. I should say before I delve into my problems that none of them resulted from the kit. Everything I expected from the Northern Brewing and the kit was in place and excellent instructions were included. That said, let me tell you how badly I messed this up.

Usually when I botch something like this it’s because of tinkering around but this time it was really had more to do with not paying attention and messing up the timing. I followed the instructions to start off so the boil went fine. After that was when the problems started. I realized I did not budget enough time to cool off the brew post boil. I rushed the cooling process but despite my best efforts the wort was not cool enough when I had to walk away from the brew for several hours. I left the pot sitting in a cold bath but despite this I came home to find it still warm. I pitched the yeast anyway as the temperature was close to where it needed to be. I moved the brew to the fermenter and moved it to the brewing closet.

I had every intention to move this brew to a secondary but life got in the way and not only did I not move the beer over but I left it sitting for an extra two weeks. The bottling process went smoothly but by this point the damage had been done. I don’t understand just what went wrong but the beer tasted horrible. There is a sour taste to it so I’m assuming that there was an infection of some sort. I’ve had infections in two other beers. When this has happened the beers had crazy carbonation but that wasn’t the case this time. The carbonation has been fine, excellent in fact so I’m confused as to what happened. I’m still doing some reading but if anyone out there has an idea of what happened I’d love to hear from you.

This experience has made me want to invest in a few new pieces of equipment. I think I’ll look into finally purchasing, or maybe even building DIY, a wort cooler. Any step I can take to minimize mistakes and problems is a good thing. In any case I learned a few things NOT to do in this process and I won’t make those mistakes twice. Like Thomas Edison said “I have not failed. I’ve just found 10,000 ways that won’t work.”