If you’ve thoroughly immersed yourself in the online world of craft beer, chances are you’ve run into the work of Jacquelyn Dodd at some point. You might know her as The Beeroness, her online handle where she cooks up amazing recipes using craft beer as primary ingredients.

Some of her most popular recipes have been reworked and combined with new fare in her first printed work, The Craft Beer Cookbook

For those new to cooking with beer, I highly recommend reading the introductory overview to learn about how the style of beer affects the recipe as well as get tips on how to adapt existing recipes to incorporate your favorite brew.

The best cookbooks are not only nice to look at; but also practical in their applications. To test out the book’s ease of use, I chose the Beer Braised Chipotle Chicken with Red Peppers over Drunken Cilantro Lime Rice and Beer Braised Green Beans with Bacon and Shallots for a side.

A trip to Whole Foods created a bill of $25 for a meal that serves four. Granted, I had the spices on hand and forgot the red peppers; but that’s still a good price, including the necessary beer and the splurge of peach-wood bacon.

This is probably a great time to mention that I’m horrible at following directions (see “forgot the red peppers”) and time management in the kitchen. That said, I found the relatively few ingredients and preparation steps a great relief. There are definitely more involved meals in the cookbook; but if I can make this, so can you. 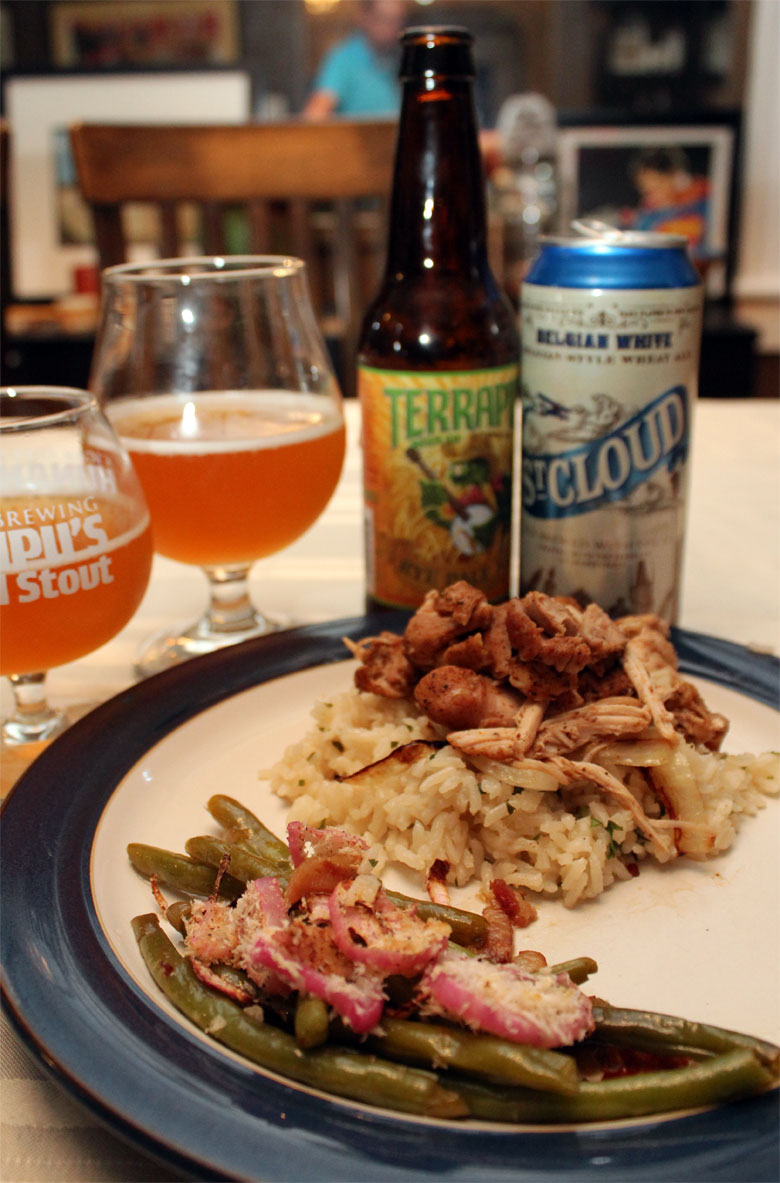 The green beans took on a good bit of the Terrapin Rye Pale Ale and provided a nice bitterness and splash of citrus. Sautéing vegetables in bacon fat should be a requirement for every green thing you eat. The peach-wood smoked thick cut bacon was a nice upgrade and created texture in addition to the delicious flavor. The oven-fried, Panko-coated shallots made for a nice vinegar-sweet crunch on top.

The cilantro-lime rice also held on to the Terrapin Rye Pale Ale’s flavors and the intermingling of the beer with the lime juice and fresh cilantro was a very nice twist on the sticky, hearty grain. I used jasmine rice, which provided an additional exotic layer. The browned white onions made a nice middle transition; but I did miss the red peppers, which would have added more color and another complementary flavor.

The chipotle chicken was a fantastic topping, the quintessential “last bite” element. A spicy mix of ground peppers was laid on as a rub and the thighs were browned in a cast iron skillet before being drowned in sixteen ounces of St. Cloud Belgian White ale.  After only ten minutes, it was ready to be shredded up and plated.

From beginning prep to eating, it took about an hour and a half and included some simultaneous pot-watching. If you prepped beforehand, your pre-meal setup would only be around 30 minutes or so. Not bad for an amazing meal where the flavors of craft beer shine.

The Craft Beer Cookbook by Jacquelyn Dodd is a great primer for cooking with beer with one hundred recipes to get you started. The photography is enticing and the pages are well laid out and easy to digest (pun intended). It would make a great gift or addition to your cookbook or beer library.

The best part? You’re guaranteed your meal will pair nicely with a nice cold craft beer.