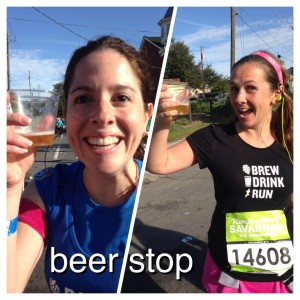 Depending on your current ability and interest level that physical push may manifest as a bike ride around the neighborhood, a hike through the woods, or for an increasing number of people, running a half or full marathon.

More than 18,500 of those athletic minded individuals ran in the 2013 Rock ‘n’ Roll Savannah Marathon and Half Marathon. The participants of proper age and that wished to wait in line for a wristband were rewarded with a free beer courtesy of race sponsor Michelob Ultra.

But what is it that makes running and beer such a solid pairing? Don’t worry, scientists are hard at work on the issue. A recent New York Times article espoused the research of Dr. Manuel J. Castillo who has studied the effects of rehydrating with beer as opposed to water extensively in laboratory tests. His work concluded that beer was as effective as water for recovery fluid.

Don’t get too excited just yet. That same article also referenced the work of researchers at Griffith University in Queensland, Australia who found that beer’s post-exertion benefits are limited to light beers, preferably with added salts.

So where does that leave the craft beer fan? Large races like the Rock ‘n’ Roll series are limited to drinks from the big-brand sponsors attached. And even if there were more craft beers available at the post-race party, not many fit the prescribed beverage suggested by those research teams.

If you’re willing to wait and drink your beer back in the comfort of your own home, Westbrook Brewing Co’s “Gose” may be the closest thing to a light beer with salt added in the craft beer world. Westbrook’s take on the resurrected German ale is a cloudy yellow, slightly tart and twangy ale with a big pinch of salt on top. That salt along with the mild sour turn, despite how it might sound, makes the beer extremely refreshing. Four percent alcohol by volume makes it sessionable, so you can allay your fears of dehydration. As an added bonus, it’s available in cans and perfect for hauling to your post race parties in a cooler.

Smaller events are a better bet if you’re looking for provided local or small batch beer after the run. Earlier this year, Alpharetta, Georgia hosted a 5K followed by a mini craft beer festival with representation from over 100 different breweries.

Other entrepreneurs see the lack of craft beer themed races as an opportunity to go even bigger with race series hosted in multiple cities.

The Great American Beer Run plans to expand from two locations in 2013 to becoming a coast-to-coast event with eleven races in 2014. Craft Brew Races is looking to open up its series of combination 5k and beer festival to more cities as well with a goal of being nationwide by 2015.

But until Savannah gets one of these designed craft beer running events, you’ll have to do it yourself by hosting a post run party.

After our Team Brew / Drink / Run crew completed the 2013 Savannah Rock ‘n’ Roll Marathon and Half, we skipped the Michelob Ultra at the finish line. Instead, we took showers and regrouped for an excellent tasting session.

In between all of that delicious beer I drank water. A lot of water.

Those heavy brews were delicious; but not designed to replenish the nutrients lost during those two hours of running.

The beer did help me forget my sore knees for a few blissful hours. It seems the scientists totally missed the most important benefit of those post run brews.