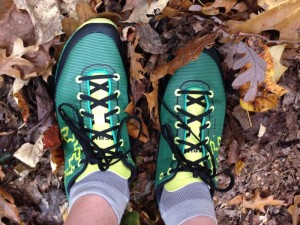 The great folks at the Swedish footwear company IceBug sent me some spiffy new trails shoes to try out: The Spirit3 olx model, designed with a focus on adventure races. There aren’t many trails to run here in Savannah, Georgia, those we do have don’t require a lot of special equipment. They tend to be well tended and flat. With this in mind I looked at my new Icebug trail running shoes with apprehension and a little bit of concern. Knowing I don’t run trails often I was worried these thin looking shoes were not going to provide the type of support I have in my street shoes. I should also say the Icebugs were a bit flashier than my usual shoes. All that bright green!

I did have two trips north of Savannah planned so I figured that was a good time to test these shoes out. The first of these tryouts was in Roanoke, Virginia. I had plans set on running some of the trails at Mill Mountain Park. Unfortunately I didn’t have the chance to run much at all.  All I really had time for was a short break in session with the Icebugs. I left that run feeling better about the shoes and the support they were going to offer and a desire to run the Mill Mountain trails again.

The next week I made a trip to Greensboro, North Carolina. I did some research on trails in the area and found that there were two locations

with several trail options. The furthest from downtown, where I was staying, are in an area around Lake Brandt. They looked tempting and beautiful but I was concerned about the difficulty of the trails. I settled on the second area of trails which center on the Greensboro County Park. Specifically I chose the trails in the Guilford Courthouse National Military Park offered the level of trail I was looking for, connected up with the County Park trails if I wanted to expand my range and because I’m a sucker for a good US National Park. The Military Park was fantastic. There were several hills a mix of paved and unpaved trails and some great scenic areas that made for nice stops. After picking up a Park map from the visitor center I set off from the parking lot.

The Icebugs are a much brighter color that anything I would normally wear but the parking lot is where I first noticed the biggest real difference between the IceBugs and my normal running shoes, the spikes. I hadn’t run with spiked shoes since my high school track days. The IceBugs made the same satisfying crunch on the pavement that I remembered from track. Off the pavement the shoes had that same track shoe feel. They were tighter than my regular road shoes and certainly didn’t have the same cushion that I’m used to but I did feel like I had plenty of support. As I moved from even trails into some of the Park s rougher terrain I still felt that support and didn’t have any problems. In fact the only time I felt as if I was going to hurt myself was when I was running on flat ground and stepped on a golf ball someone had left in the grass. The spikes were a nice addition as they added some grip as I ran up those unfamiliar hills.

All in all I was very pleased with the Icebug Spirit3 OLX shoes. They were comfortable, supportive and fun to wear. If I ever need to buy another pair of trail shoes I’d absolutely put Icebug at the top of my list. 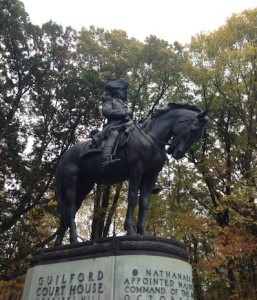