“It’s like waking up in the morning and high-fiving a farmer.”

I’m paraphrasing Philip Brown, owner and roaster at Perc, Savannah’s premier coffee supplier. Like so many great quotes, this one came after the recorder was turned off and we moved from “interview” to “hang.”

Philip talks about coffee like my friends and I talk about beer. Part of that is technical, like describing aromas and taste patterns; but his passion for the topic elevates discourse into the more ethereal and esoteric aspects as well. It’s not just about the final brew – it’s about all of the little steps taken during the journey from field to cup.

I sat down with Philip and Southbound Brewing Co.’s marketing director Carly Wiggins and brewmaster Smith Mathews to discuss Moonlight Drive, their upcoming collaboration beer and Tamp & Tap, the release party event to be held on January 11th at Perc.

Coffee stouts aren’t a new thing; but they’ve been gaining in popularity and are a perfect excuse to bring two local businesses together. Philip experienced that firsthand while working at Jittery Joe’s in Athens, GA when Terrapin utilized those venerable roasters to create their delicious Wake N Bake. He’s bringing that prior knowledge and spirit of hometown collaboration to Moonlight Drive.

The Birth of a Collaboration 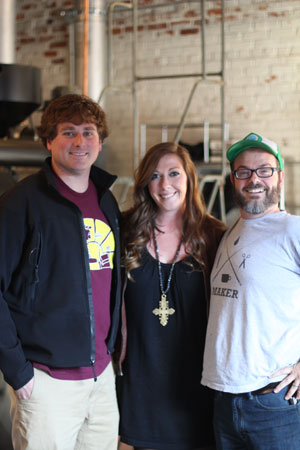 Philip Brown: “I heard wind of these guys opening up and I checked their Facebook page and was super excited. Savannah was just starving for it and then to taste the beer and have it be so good – that’s the capper.”

SM: “We started out by talking about it and decided we should do a cupping. He put several different varietals out.”

PB: “You guys picked the Bali Blue Krishna out right away. I had it in my mind we might use an Ethiopian but [Smith’s] point was that the Bali would really cut through and be noticed and I think that’s dead on. It’s a really interesting coffee. It’s Indonesian and wet hulled. I like it a lot because it’s got the body of an Indonesian and the smokiness and spiciness but it lacks a bit of what Sumatrans can sometimes have – a bit of a green pepper thing – and this is kind of mellow on that side. A bit sweeter.

“I like the idea of telling the story of places in Indonesia that aren’t Sumatra because you see so much Sumatran. We thought that smokiness might work really well with the beer and we’re really excited with what we came up with.”

PB: “The challenge for us is that we’re so used to brewing coffee and we had all of these theories about how to brew coffee and how that might help and work that side of the beer. But we had to dial back our ratios to realize we’re not making coffee but making a beer that has a complementary taste of coffee.”

SM: “It seemed the natural fit would be to cold brew it. A lot of the coffee stouts have an intense coffee flavor but sometimes they have a stale taste. We tried to analyze it from a coffee roasting perspective and a brewing beer perspective and see how we could maintain that fresh coffee flavor and not have it go stale a week after we brewed it. So we determined that cold brewing was the best process.

“We’re going to treat the beer like they would normally treat water in the cold brewing process which is a pretty cool thing that I’ve never done before. It’s a completely different approach which I think is really cool.”

SM: “We developed the recipe around that specific coffee, looking at the notes and flavor compounds. We brewed a pilot batch and the coffee concentration was really intense but everyone seemed to like it. But the beer itself wasn’t showing up enough. It was like a pint of coffee. You would have one in the morning and that would wake you up. After that pilot batch, not only are we adjusting the coffee usage but we also adjusted the grain ratios to get a little bit more roast and chocolate and caramel, things that would naturally tie in with the flavor of coffee. We also adjusted the fermentation temperature to get more of the yeast esters out for a slight fruitiness. It should be a good pairing with this specific coffee.”

SM: “The name makes sense when you think about it. It’s a dark stout and then you get the “drive” from the coffee.”

SM: “We’re doing a 60 barrel batch. We’ve already brewed it. We’ll be distributing to South Carolina, our current market in Georgia and also when we open up in Florida. We’re looking to be in Jacksonville by the end of the month. So it should be a good opportunity to put the beer out there where their coffee is already available as well. We’re talking about doing some bottles, maybe 900 22s. A limited bottle release, hand-bottling. We’re playing around with that idea and it’s looking promising.

Carly Wiggins: “We were all talking about what we wanted to do for a release and then you guys [Perc] said you hadn’t had a grand opening for the place.”

PB: “We had talked about having a grand opening thing anyway and when we found out when the beer would be ready we decided to have one thing and it would be perfect. As soon as they came over for the cupping we showed them around and they liked it . It seemed a cool way to gain exposure to the beer as well as let people check out our new space.”

CW: “Anybody can come in. It’s all ages. But if you want beer, you purchase a souvenir pint glass with a wrist band. It’s $20 online and $30 at the door and includes unlimited samples of that beer and others that we have.

“The Accomplices are going to be playing music all day. We’ve got the Jepson Cafe and Angel’s BBQ that are going to be working together to create some food cooking with coffee and beer that will be available for purchase.

“Tours and cuppings at Perc and tours of Southern Pine Co. will also be available. So, if  you want to come and check out the music and have some food you can do that. If you want to try some beers  you can do that too. Everybody is welcome.

“This is a celebration of local collaboration between us and everyone else that’s involved. We have really strong businesses coming together to celebrate something great in Savannah and I don’t know if this has really happened before.”

SM: “This is going to be a tasty beer and I hope it will be an annual one as well as this event. I’m hoping it can be something we team up on again. It would be fun to tweak it each time and pick a different coffee. If we bottle it, these beers will be age-able so people can buy the bottles and age this coffee stout and theoretically do a vertical tasting.”

PB: “I know from my days at Joe’s with Terrapin that beer got better and better. The very first one versus what they are putting out now? It was good the first time and it’s gotten better with tweaking the roast profile, the blends, and also the beer.

“That collaboration – it’s nice to work with these guys because wherever  you are as an artisan you get better and you’re not the same person you were the year before.”

Tamp & Tap will be held on January 11th at Perc’s East Broad St. Location. Get more info and buy your tickets now.