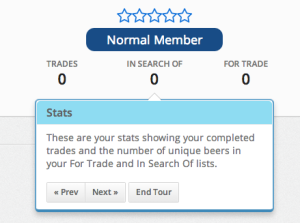 The launch follows an advance sign-up period. Those that elected to be notified on launch received emails this morning with links to create their profiles.

The newly launched web app was met with a rush of activity, causing some aspects of the site, like beer lookups, to be temporarily sluggish or non-responsive.

We actually use the Untappd database so all the beers you may be interested in should be there. The issue right now is that we had a huge influx of traffic that even we couldn’t anticipate.

The Untappd server is just running a bit slow so give it a few minutes and try again.

The service is launching with a responsive design, suitable for desktop browsers, tablets or smartphones.

Key features include user profiles, in search of (ISO) and for trade (FT) lists, in-app messaging and a rating system that records previous trades and scores from trade partners.

We’re looking forward to putting the app through its paces and setting up a few trades in the days ahead.