Keith has written previously about his beer trading experiences (make sure you read all three parts) and I have been fortunate enough to benefit from his trades.  Hearing about his experiences and sharing his beer has encouraged me to give trading a chance.

I talked it out with Keith and he made a few suggestions. The first was to go to BeerAdvocate.com, set up an account and develop a “history” in the trading area. The trading community, it seems, can be cagey with newbies. This is understandable, without a history no one knows if you’ll follow through with your trades and no one wants to lose beer and time. Setting up an account was as easy as filling out a general information form. Developing a minimal history was bit more of a trick but only involved posting some comments on a forum or two and waiting a little while to be approved. I suppose at a minimum this scares off the idle gawkers.

Keith also suggested I start small, which would have been my plan anyway. Only now do I feel like I have anything in my cellar that anyone would want to make a big “whale” trade for. I very much enjoy trying out new beers when I travel, especially those that I can’t usually get my hands on here at home, so doing a local for local trade seemed the best way to try some new beers while getting my feet wet all with minimal investment.

After I was approved to post on the beer trading forum at Beer Advocate, I nervously wrote out my short call for locals for locals and clicked the post button. To my surprise it didn’t take long for a few responses. The first were obviously people feeling me out, most of these didn’t go much further than a swap of messages. One or two weren’t interested at the time but said to file away their contacts for later. Eventually I narrowed down my interest to two posts. One was from out west the other was North Carolina. I was most interested I the trader out west as the options for new and untried beer were at their greatest. Sadly, we couldn’t work out a deal so I moved onto the trader from North Carolina. I travel to N.C. sometimes so the appeal wasn’t as great but in a manner I liked this trade better. The distance was shorter, I knew what I didn’t want, and I was cutting my teeth anyway to this trade would be lower stress. 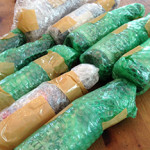 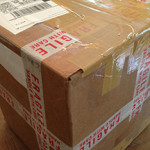 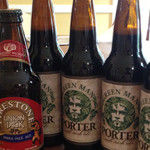 After a few messages we decided on a money cap. We agreed to a $20.00 maximum trade, in essence two six packs of locals. I work in Florida and have access to Cigar City and that is what my trading partner was most interested in so my end was easy: a six pack of Jai Lai and a mixed six of White Cracker and Helles Lager. All these are available in cans so it felt safer to ship too. For his end I asked for a mix of locals, preferably porters and stouts, my favorites, but I wasn’t going to be picky. Really, I’ll try anything. I did ask that if I could get it in Georgia I didn’t want it and sent him a list of N.C breweries I had access to.

We agreed on a ship date, traded tracking numbers and the waiting started. A few days later I received a message to confirm the arrival of my shipment. The next day I received a big box of beer on my porch. I sent a confirmation message myself and the trade was done. An easy trade if ever there was one.

Opening that box was super exciting. Not having requested anything specific it really was a surprise box. After opening the box I checked the packaging just so I recorded someone else’s shipping methods. Each bottle was wrapped individually and all were well cushioned within the box. No breaks. Again I was pleased. Under all that bottle wrap there were two disappointments though. One beer was a bottle of a beer from one of the breweries I had mentioned as available in Georgia. Fortunately it was one that I like so no real harm done. Second there was a California beer in the mix. Luckily this was a beer I can’t get in Georgia and had never had so it wasn’t a big disappointment. I wrote both negatives off as a reminder to be more specific in the future and drank a beer. In the end I had a six pack of Green Man Porter that I have enjoyed very much and a mix of six others, five of which were all new to me. Not a bad deal.

Obviously there is a trade off here. I was able to try several new beers even though I “paid” more for the beer because of the shipping and the time but the experience was a good one and it was exciting. I’m not sure I’ll be regular beer trader but I certainly see doing a few more trades down the road.