As soon as I heard about Spiegelau creating a glass specific to drinking IPA’s I was pretty eager to do the side by side experiment. The glass is available online from Spiegelau and from Dogfish Head and Sierra Nevada which helped create the glass. (Spiegelau has recently created a stout glass as well, this time with/for Rogue and Left Hand Brewing) I’m not the first, and won’t be the last to write about this, but here’s my take… 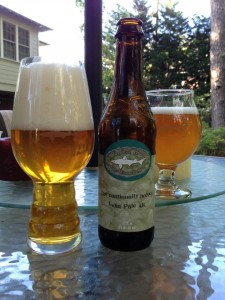 Sarah, our regional DFH rep, was kind enough to give me the glass at our most recent Your Pie/Dogfish Head tap take over. Due to her generosity I thought it was important to use a couple of bottles of their flagship 60 Minute IPA for this review! Both beers are from the same six pack and were bottled on 3/5/14. I don’t have a specific glass I prefer for IPA’s, but I usually choose a tulip or snifter of some kind. For the other 60 Minute beer I used my DFH snifter. To keep all things equal I decided to pour both beers pretty aggressively into both glasses, directly into the bottom.

The Spiegelau IPA glass had a tremendous 3 – 4 finger head, the snifter between 1 – 2 fingers. So big difference there.

One of the big things this glass is supposed to do is “shoot” the aroma into the nose while taking your sip, and I’d say it does a fantastic job at that. Without a doubt I was getting more aroma while I tasted from the Spiegelau glass.

As for smelling the beer before your sip, I think I prefer the snifter. It was just easier to get my nose close to the beer.

The taste? I don’t feel like the glass improved the flavors of the beer much at all (not that a 60 Minute needs improvement), but all of the aeration from the head and the ridges at the bottom of the glass made the beer noticeably smoother. I found a harshness at the end of each sip I took out of the snifter when compared side by side with the other. The beer from the Spiegelau glass was slick and smooth, still carbonated but without any aggressive tingle or harshness.

There are a few minor issues to this glass for me as well. First, given the design, I can’t see this being the easiest glass to clean by hand. Second, and let’s be honest, this is not the best looking glass in the world. I might go as far as to call it a bit goofy looking, although I will admit I think it looks a lot better with beer in it for some reason. Neither of these are reason to not use the glass though.

I think the bottom line is this: If you are really into glassware and IPAs, get yourself a glass or two. I did find the beer in the Spiegelau to be better, but not by such a great margin that I will use it obsessively. (But I am enjoying an IPA in it as I edit this post!)