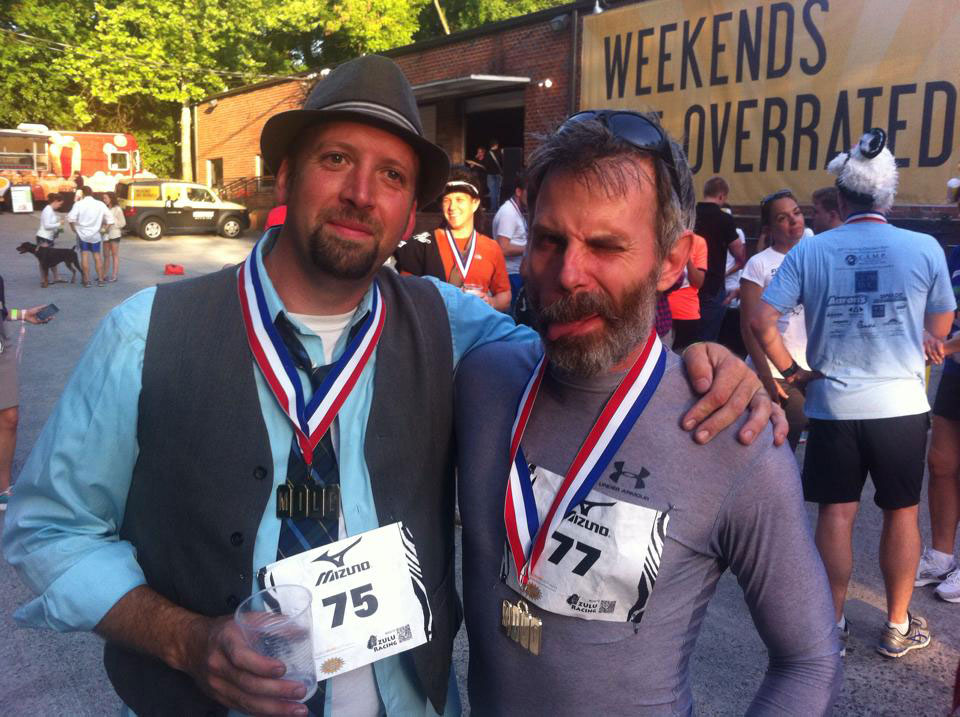 Andrew Griffin on right, with friend Aaron on left

“Great beer, fun people, little run.” That was the tag line for this event, and it did deliver. Whether people were sprinting or strolling through the mile, we were all there to have a good time.

I’d never been to Monday Night Brewery before and I didn’t get to see the brew facilities (this time), but they have a large room up front with a double-sided bar that also faces their outside seating area. Maybe because it was event night, but it seemed like the kind of place where people really liked their job.

A big part of this race was raising money for “Ties That Matter“. TTM is an organization that collects recycled neckties to make dolls and other products. They assist low-income Haitian women with the opportunity to earn income as well as a sense of accomplishment and hope for a better future.

After online registration, participants were highly encouraged to obtain “wagers” – bets on how long it would take to complete the beer mile. Bet money went to TTM.

I can run a 7-minute mile, but have never intertwined four beers within that mile. So, I really didn’t know how long it was going to take. I said 15 minutes, because that’s what my friend I was running with submitted; I’m also not a beer-guzzler.

At the check-in table, they gave you your bib and t-shirt. All of the staff was very friendly and helpful. The brewery is located at the end of a dead-end street, which is conveniently about 1/4 mile. So the course was 2x out-and-back; from the start line, it was an easy uphill run.

The beer served was the Nerd Alert, as they say, a pseudo pilsner. It was a full 12oz. pour. I’m usually impartial to a pilsner, but this was pretty good. Maybe it was the heat, or the adrenaline, or the crowd. Maybe it was just a really good beer.

Even though the “race” was promoted as a charity event, there were a handful of serious competitors. The bibs had timing chips on them as well as a running clock at the finish line. You may have seen the video of James Nielsen setting a record running a sub-5-minute beer mile. There were participants there with very impressive times – one with sub-6-minutes and a few sub-7-minutes.

At the end of it all, I completed the beer mile, got a good quality t-shirt, and even a medal. I drank good beer, and met lots of people. “Get Drunk, Get Fit” was one of the hashtags for the Monday Night Mile…a good example of keeping it all in balance.

Andrew Griffin likes to do things the hard way and then reward himself with good beer. He’ll do pretty much anything for a t-shirt, like running for donuts, eating hot peppers, or doing 1000 burpees. The madness would be misery without his amazing wife and really cool four kids.