Jacksonville is my home away form home and considering how much local beer there is to be had here it’s a good second home to have. There are six 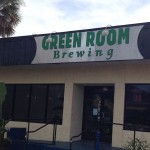 breweries here in Jacksonville. I’ve written about Intuition Ale Works but I made it my mission to visit the other five breweries this summer.

First on my list was list was Green Room Brewing. I had tasted a few of their beers at Hunaphu’s Day and was looking forward to tasting a few more. I was fortunate to be able to visit them during Jacksonville Beer Week when they had a special release happening. 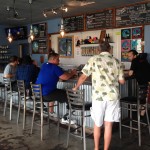 Green Room has the feel of a bar, though it’s a friendly open space where dogs and children are encouraged. The space is divided into two smaller areas. The front holds the tasting area and several tables. In the back is a smaller area that houses plenty of board games a ping-pong table, the largest Connect Four game I’ve ever seen and a Jenga type game that looks like it was made of 2x4s. The whole place has a very relaxed feel and I’m certain that if I actually lived in Jacksonville I would be a regular.

The back area also holds the brewing area. It’s separated from the game room by a half wall. There are several taps on this wall as 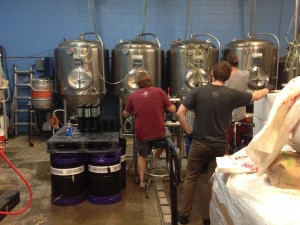 well but they were not in use when I visited. There were some exciting things going on the brewing room though. They were bottling The Secret Spot, a Russian Imperial Stout brewed for the Green Room’s third anniversary. Fortunately I was offered a taste and was impressed. The release day will be June 14, 2014 when a barrel aged version will also be available.

If you can’t make the Anniversary release event they always have plenty of beer on tap. Their regular beers include Head High and Double Overhead, an IPA and a double IPA, Shaka, an oatmeal stout, Diamond a Belgian Wit, Undertow a barley wine and Pablo Beach, a pale ale that is also available in cans. My favorite was the Shaka with Double Overhead a close second. They also had several limited release available including A Green Room/Cigar City Joint, a collaboration between the two breweries. My favorite of the limited beers was Hanna, a tart Berliner Weisse.

Green Room is a nice place to hang out and have a good beer and as it’s close to Jacksonville Beach and would make a great stop to pick up a growler before hitting the waves.

Green Room is also runner friendly. There is a Running For Brews meet up every Tuesday at 7:00 pm for a three mile run and drinks. All running levels are welcome. 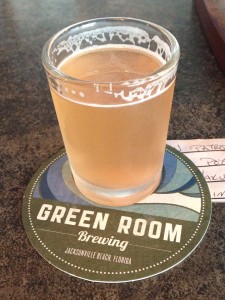