That understatement is how owner John Henderson describes the Sound Garden, an expansive outdoor venue behind Coach’s Corner, his venerable Victory Drive bar and grill. In the past the Sound Garden has served as an ideal location for patrons to enjoy their food and drinks outdoors or listen to musicians perform on the north-end’s professionally-rigged concert stage. This Saturday, it will prove its versatility by hosting the first-ever Summer Suds Craft Brew Festival.

The event was organized by Laura Simpson, a beer festival veteran who launched the original Savannah Craft Brew Fest and guided it through its first four years while working at the Savannah Convention and Visitors Bureau.

There will be more than 45 breweries represented at the Summer Suds festival. The list includes local favorites like Moon River, Coastal Empire and Southbound, regional breweries like Sweetwater, Terrapin and the newly operational Macon Beer Company as well as craft industry titans like Sierra Nevada and Dogfish Head. Only breweries that meet the Brewers Association definition of “craft” were invited to participate. This means that all of the breweries are small (less than six million barrels of annual production), independent (less than 25% of the company is owned by a non-craft brewer) and use traditional ingredients in their recipes. This standard was important to Simpson and Henderson, keeping what she called  a “purist craft brew” mentality. 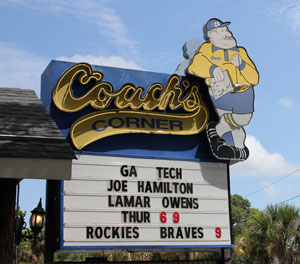 The set-up will be familiar to anyone that has attended a beer festival and includes tables organized by brewery where volunteers from the Savannah Brewers League will pour small sample servings into a commemorative glass. A program will be provided that includes a festival map and a list of all of the beers with ample room to include personal tasting notes.

Attending breweries are focusing on seasonal beers (it is called Summer Suds, after all), so expect an emphasis on lighter-bodied beers like Abita’s citrus-infused Lemon Wheat and Mother Earth’s refreshing Endless River Kolsch.  This is a smart move for a warm Savannah afternoon, and in addition to the cold beer, the Sound Garden will be covered with a giant tent with large fans placed around the lot. This also ensures a rain-or-shine event.

As a bonus, select festival beers will also have suggested food pairings from the Coach’s Corner kitchen. Those small bites are included in the admission price. Live music from Lyn Avenue will also contribute to the atmosphere.

Coach’s Corner is no stranger to craft beer, as they have dedicated an impressive 25 of their 28 taps to craft brands like Harpoon and Angry Orchard. That plethora of tap handles will come in handy this Friday night for the pre-festival Samuel Adams Tap Takeover.

Tap takeovers are a great way for a brewery to showcase their diversity and perhaps no craft brand has as much diversity as the Boston Beer Company, brewers of Samuel Adams. They will be providing 24 different brews for the occasion, making this the second largest tap takeover in the company’s history. Flights will be available for those who wish to have smaller pours, allowing them to enjoy more beers and compare flavors. Samuel Adams representatives will be on hand to answer questions and provide promotional giveaways.

While the beer in itself is a great reason to come to the event, there is an important charity connection as well. Proceeds from the Summer Suds Craft Brew Festival will be donated to Along Came Bill, The Bill Lester Memorial Fund, which is devoted to supporting local organizations that work with disabled adult members of the community.

While Savannah’s other craft beer related events often rely on tourists to fill the venue, “This event is a locals event,” said Simpson. That’s especially true with the Savannah-focused charitable component, which she added is “going to benefit our local population.”

The Summer Suds Craft Brew Festival (Facebook Page) will be held at Coach’s Corner on Saturday, June 21st from 1-6PM. Advanced tickets are available online for $35 at Brown Paper Tickets. Designated driver tickets are only $10 and include complimentary soft drinks. Volunteer and sponsorship inquiries can be directed to Laura Simpson at [email protected]

Brew / Drink / Run is proud to be a sponsor of the inaugural Summer Suds Craft Brew Festival.