The Brewers Pizza website has a great fictional story about the founding of the restaurant. I sat down with owner Mike and learned the real story. When I daydream about quitting my job and opening a place of my own, it often involves opening a pizza place and having lots of craft beer on hand to wash it down. Sometimes that dream involves a small brewery on the side that serves up some great and unusual concoctions. Mike is living that dream. He started up Brewer’s Pizza and later added the brewery, functioning under the name of Pinglehead Brewing. 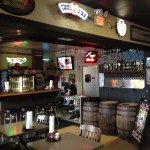 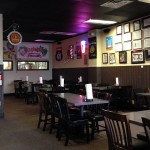 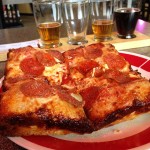 The pizza at Brewer’s Pizza is pretty amazing. The pub is in a shopping center but once you step inside you don’t get a shopping center feel. The restaurant has more of a hole in the wall feel, gritty, but it’s clean and there are plenty of tables if you are there to eat and a nice sized bar if you’re just there to drink. There are several TVs, some of which are dedicated to sports and others scroll the tap list. I would have no issues taking my family to Brewer’s Pizza, I think they’d love it.

The food is great but the beer is just as good. It’s been my experience that a lot of brew pubs serve standard beer, good perhaps, but nothing that will knock your socks off. This is not the case with Pinglehead. Their tag line is “beer with attitude” and they live up to that philosophy. With 32 taps and 50 bottles of craft beer available ordering was no simple task but I wanted their beers so I ordered a sampler that included all seven of their beers on tap that day. They also dedicate several taps to other area breweries so local flavors are easy to come by. It’s great to see breweries that support each other and encourage you to try other local beers. 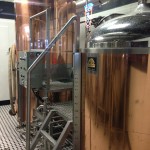 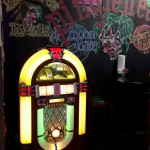 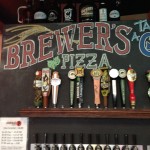 All the beers I tried were above average so you can do no wrong on a visit to Pinglehead but there were a few standouts. I very much enjoyed the Imperial Red. I’m a fan of reds and this is one of the best I’ve had. Ambitious Monk is a very nice Belgian ale with lots of banana and yeast. The best of the batch, in my opinion, was the Black hOPs, a dark black IPA with loads of hops but a nice roast flavor to round it out. Not something I could drink everyday but an incredibly impressive beer, from a home brewers perspective, was the Banana Pancakes. Banana Pancakes was a special beer brewed for the Jacksonville Beer week festivities. It tastes like banana pancakes. The cool thing was that there were no artificial or added flavors; every flavor in the beer was produced with malt, hops and yeast.

The brew pub that is Brewer’s Pizza/Pinglehead is a great place for food and brews. If you are in Jacksonville I highly recommend a visit. Oh and don’t forget your growlers! 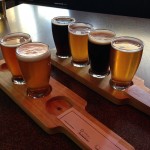 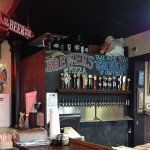 Brewers Pizza and Pinglehead are located at: 14B Blanding Blvd. Orange Park, Florida 32073