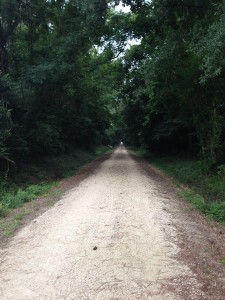 Every year my kids attend the Mark O’Connor Fiddle Camp in Charleston, South Carolina. Normally we stay in downtown Charleston but for various reasons we had to stay outside of town this year in an area known as West Ashley. As a runner this looked like a terrible place to be. The main road through the area is the Savannah Highway a four-lane strip of concrete, traffic and sporadic sidewalks. I spent some time searching for running routes but for whatever reason all I could come up with was some neighborhoods to weave through.

The night before my first run I noticed a lone runner out on a dirt road behind my hotel. I sighed, if only I could find a road like that to run on. The next morning I was not looking forward to getting out on the streets but that runner kept nagging me so before I headed out I took one last look at my RunKeeper map and lo and behold there it was, the West Ashley Greenway.

To get to the closest access way to the Greenway I did have to run a short section of the Savannah Highway, but only a block or two, before I turned into a neighborhood. The scenery changed immediately. This neighborhood was a quiet respite from the chaos of the highway. The entrance to the Greenway was closer than I thought, just a half mile from my hotel door. To my left and right I saw a clean dirt “road” leading off into the distance in both directions. The intersection of the street and path was guarded by a gate with a opening just big enough for a single person on a bike. I picked a direction, West, and started running. The western direction was back toward my hotel and I hoped to find closer entrance to the Greenway. I didn’t have any luck in that regard but the run was so pleasant I ended up adding a mile to my run

After my run I looked up the West Ashley Greenway. It’s a ten and a half mile rails to trails path running from it’s East terminus at the South Windermere Shopping Center on James Island to it’s Western end on John’s Island. The Greenway is flat and straight, as you might expect from a rail to trails, and mostly mirrors the Savannah Highway (Highway 17).

I ran about three miles worth of the full ten and a half at about the mid point of the trail. I found that stretch to be clean and well maintained. It seems that the western end of the trail is harder to access as it’s marshy at that point and there are fewer cross streets but that makes for some pretty runs. I know I stopped to take more than one photograph. My favorite aspect of the Greenway is that it runs through neighborhoods. I love peeking into people’s backyards and there were plenty of houses along the trail. It was fun to see the clever ways people developed to give them direct access to the Greenway. If I have a gripe about the Greenway it’s the gateways at the cross points. Each had that slim section of the gate forcing you to go in that way. As a result the pathway at each of the entrances I saw is pretty worn and weathered; opening those up a bit would be a good thing. I’d say on five runs I saw a total of four people, five if you count the guy that inspired the search that led me to the Greenway. I hope it’s used more because it’s a great path to run on.

If you are in the Charleston area I suggest hunting down the West Ashley Greenway. I think it may even be worth the short drive from downtown.

The view at about mile marker 5 on the West Ashley Green Way.