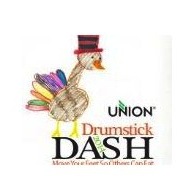 The Roanoke Drumstick Dash is a race I’ve run several times in its nine-year history, enjoying it each time. The Dash, as it’s called locally, winds through Roanoke making sure to touch on many of the city’s sites and local businesses. Roanoke is pretty city and there is plenty to look at on the run. The route has changed every time I’ve run but each time the Virginia Transportation Museum, the Taubman Museum of Art, the O. Winston Link Museum and the Roanoke rail yards (Roanoke is a major hub for Norfolk Southern Rail) have always been sights to see along the way and the Blue Ridge Mountains are always in the distance providing a gorgeous backdrop.

Roanoke is a hilly place and though the route has changed over the years it always includes a few hills to test the endurance of this Savannah (read flat land) runner. The 12th Street Bridge was added to the route a few years ago and it’s tough. Despite the test it provides it takes you over the rail yards with St. Andrews Cathedral, a beautifully located Catholic church that overlooks downtown, so even when you’re struggling over the bridge there is something to look at.

The Drum Stick Dash is challenging run but I very much recommend it if you find yourself near Roanoke on Thanksgiving Day. My father in law and I have run it many times and this time I convinced my two kids to run along. It’s a good way to start the day, hang out with family and friends, run off those Thanksgiving beer and food calories and do a good deed, helping to provide the less fortunate with food before you overindulge.