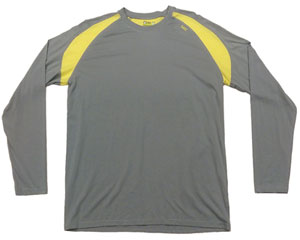 The tasc Performance brand is based in New Orleans, LA. That makes the company’s owners and staff experts in humidity. As a runner living in Savannah, GA, I know their pain. When I found out that tasc had a commitment to creating the best athletic apparel for humid climates, I was beyond intrigued.

The secret to tasc Performance’s process is their use of bamboo fibers instead of polyester. While other companies use bamboo as well, this is the first shirt I’ve worn that was not only exceptionally comfortable; but was cut and sewn with ease of motion in mind. In addition, the shirt is effective at blocking ultraviolet rays and odors and can be safely thrown in the washing machine and dryer after a long run.

The tasc Performance “Instinct” shirt is a long sleeved tee that just feels good, regardless of activity. The ventilation panels stretch from the shoulder to under each arm and hit the sweet spot for reducing overheating by letting in a nice draft of cool air. So far, I’ve worn it in temperatures ranging from 30 to 50 degrees Fahrenheit and been impressed with the cooling factor. Those runs have peaked at around five miles and the shirt has remained a comfortable non-encumbering companion.

The wicking properties of the shirt are also superb. While I never felt moisture accumulate against my skin, the shirt visibly showed sweat and the front of the shirt did get a bit wet. In the plus column, the shirt’s weight was never noticeably increased, a problem I’ve encountered with other bamboo running shirts. It’s also a looser fit than I’m accustomed to wearing, which adds to the breathability and keeping moisture at bay. Despite the generous panels, the cut is still flattering and tailored and the shirt does not look baggy.

The “Instinct” long sleeve running shirt from tasc Performance gets a solid recommendation without hesitation. If you’re looking for a trustworthy technical tee for humid areas, it’s a definite buy.