New England Brewing Co. Imperial Stout Trooper is an American Double/Imperial Stout. I’m not sure why, but this is a beer that has eluded me time and time again. I’ve tried many times to get a bottle via trade, but they have always fallen through for one reason or another. Big thanks to Lee for sharing this and giving me the chance to tick this off my want list. This bottle was bottled in December of 2013 and consumed at the first week of 2015, so it has just over a year on it.

The pour was nice, dark with a lot of brown and reddish hues on the edges, a good tan head to start that fadded pretty quickly. The aroma of this was very lacking. I kept thinking the beer smelled thin, even though that makes no sense really. The taste is much better. Classic roasted malts (almost what I’d call charred, but not quite), a little coffee and a lot of dry bakers chocolate as well. Kind of thin in the mouth-feel, but it worked with the flavor profile. I would really like to get a hold of a fresher bottle of this someday. My favorite part of the taste was the coffee note, and I feel like it might be a bit more pronounced when fresher.

Look, I get why people love this so much. The clever Star Wars inspired name and artwork (even with the legally added Groucho glasses) is going to be a huge draw. I’m not gonna lie, although I’m not some kind of super Star Wars fan boy, it was a huge draw for me too. It’s a really big reason why I wanted to try this beer so badly. At the end of the day though, it’s not a beer worth freaking out over. It is, however, a solid stout that I would pick up regularly if it was available in my market. 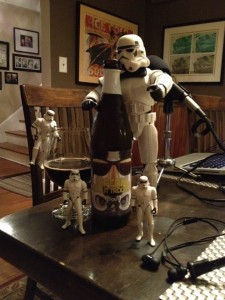