It has become a bit of a tradition to try to visit a local brewery the day after Thanksgiving when we are in Atlanta. I’ve made it to Sweetwater on a few occasions, and although that is always a good time, I wanted to mix it up a little this year. I decided to head to Decatur and check out Three Taverns.

Three Taverns officially started distributing beer in July of 2013, with their beautiful tasting room (I’ll get to that in a minute) having its grand opening in October of the same year. The brewery is slowly gaining steam and popularity with Southeast beer nerds. Focusing on Belgian style beers, their lineup has grown to include 5 year round beers (White Hops, Prince of Pilsen, A Night In Brussels, Single Intent and Le Peche Mode) as well as 4 seasonal/rotating offerings (Feest Noel, Quasimodo, Heavy Bells and Theophan The Recluse). The occasional collaboration makes its way into the world as well. 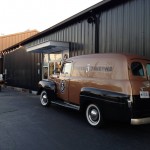 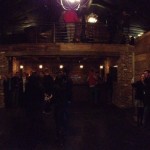 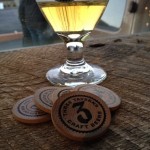 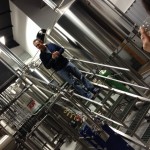 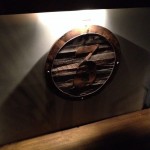 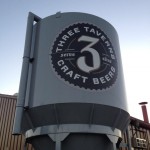 Unfortunately I was the only person able to make it out to the brewery this day, but I’m glad I got to venture out on my own. It was a cold day and when I got there there were a few people hanging outside by a small fire pit playing a little corn hole. I had gotten there a little early and the doors were still locked which was ok. It gave me a chance to snap a few outdoor pics before being let in. I was greeted by a merchandise counter immediately upon entering. The brewery proper is behind closed glass doors to the left and the tap room is just to the right. I paid the man my $12 for a glass and grabbed my coin style tokens for samples. I was slightly disappointed by the draft list this day. Although many of my favorite 3T beers were being poured, there were no new beers or one-offs available for me to try. I did get to try Prince of Pilsen for the first time, and it is an amazing pils to say the least. Lots of fresh dry hopped aroma really sets it apart from a lot of other pilsners out there. Regardless of the limited selections, I was there to check out the space itself which was great. 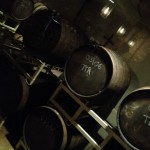 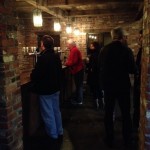 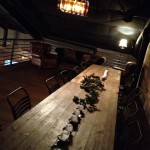 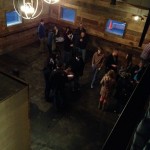 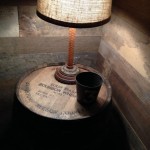 The Parlour, as they call it, is a bit on the small side. It is the kind of space a realtor might call “charming”. What the space lacks in size, it makes up for in character. Lots of rustic wood and dim soft lighting highlight the small space. All that wood mixed with the fading light outside made the taproom seem almost cozy. The bar is not huge but it served the growing crowd very well and I liked being able to peek in the window to the modest barrel aging room at the far end as well. The space is very open with just a few tables dotted in the center of the room. They made a great decision when they built a loft area over the bar itself. Upstairs you will find the same rustic feel with a long community table and a few comfy leather couches. The non first-timers wisely settled themselves up there right away. If you are local to the area take note that The Parlour is available to rent for private events!

I took the first tour of the evening, and the change from soft dim lighting to bright florescent lights was a bit of a shock, but this is a functioning brewery after all. The brewhouse is set up in a fairly typical fashion for this size space and our tour guide was was entertaining and informative. I don’t always take the tours, but I was interested to see where some of my favorite Georgia beer was being brewed.

I had a great time, although it would have been a bit more fun with some friends or family with me. I would strongly suggest stopping in when in the Atlanta area. Tours/Tastings are available FRIDAY 5:30 PM – 8:00 PM and SATURDAY 2:30 PM – 4:30 PM.