Prairie Artisan Ales Okie is an Imperial Brown Ale aged in Whiskey Barrels, 12% ABV. I found this 12oz bottle that seemed over priced (but consistent with what I’ve seen people pay for it) when in Florida, I went for it anyway.

This pours the typical dark brown and caramel cola color of an average Brown Ale, very small head that took an aggressive pour to create. The aroma is very strong of whiskey along with a little brown sugar. The taste is certainly whiskey barrel forward as well but there is a good bit more complexity to the taste. I’m getting some notes of molasses, toffee, vanilla, figs and a rich brown malt flavor as well. I find the mouth-feel of some Prairie beers to be a little thin and this one follows suit with my previous experiences.

This is a really tasty beer, but I feel like there are easier/cheaper options of similar type beers I can seek out. Very glad I tried it at least once though. 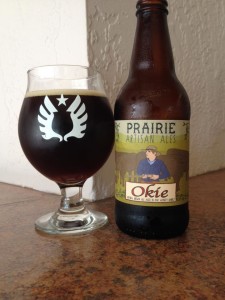