My favorite day, and I mean this sincerely, is the very last day when all the beer drinking is done and we go for a run. The Recovery Run is the one time a year that the BDR team all make it for a collective run. In fact this year was the first time ever that Andrew, who is on year three of his run streak and I, almost at year two, have run together during our run streaks. I’ve never been much for running with others but every now and then it’s a real treat to hang out with a group interested in beer and running. 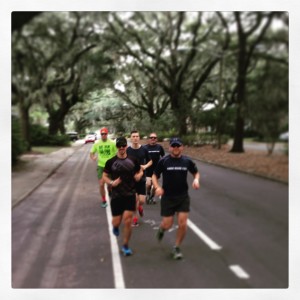 For the past three years Brew/Drink/Run has hosted the Savannah Craft Beer Week Recovery Run. In the past the Recovery Run has been a relaxed 5k (it is a recovery run after all) that touched on all the local historic sites in beautiful downtown Savannah. The run ended at the downtown location of our friends at Your Pie so that everyone could have a bite to eat and one last Craft Beer Week drink.

This year we changed things up a bit. Instead of running downtown we all met in one of Savannah’s prettiest neighborhoods, Ardsley Park. There was a one-mile run planned down one of Savannah’s live oak tree lined streets that everyone ran. At the one mile mark some peeled off for a water break but the rest completed the 5k route that took us around Daffin Park. Daffin is Savannah’s largest park with a 1.5 mile perimeter. The week before the Recovery Run the last sections of the Daffin Park running path we completed so the group was able to enjoy the cushioned, knee saving run path for the first time.

Post-run energy bars and waffle snacks were supplied by Honey Stinger. After the run many of us headed to a small bottle share at Keith’s place that turned into a podcast you’ll hear in the coming weeks.

We had a fun group this year including longtime BDR supporter Wayne who drove up from Florida for the Festival. Thanks to all who joined in on the run. We’ll see you again next year.