Schlafly Hop Trial: Enigma is a Golden Ale. 6.5% ABV, bottled on 05/27/16 opened on 07/16/16. It looks like Schlafly does a series of single hop beers to showcase various hop varieties. This one features the Australian hop Enigma. Thanks to Schlafly for sending a few for us to review.

This pours a bit more hazy than the Bramling Cross version did, but with a similar golden color. The aroma is a touch hop fruity, piney, and sweet which is mixing with a cracker like malt. I’m finding it hard to pick out an exact fruit on the nose, but it’s a little tropical with some mild citrus as well. Not too surprising this has a sweet and cracker flavor as well. More generic tropical fruitiness from the hops, with just a slight hint of spice as well. Mildly bitter on the finish with a little bit of pine. Highly enjoyable and easy to drink.

This seems like a fairly versatile hop, not sure this Golden Ale really needs any more hop complexity than it already has. 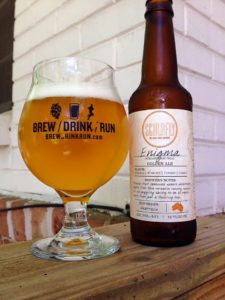