Coastal Empire Beer Co. Nettles & Ross is an Extra Special Bitter. No ABV is listed on the can, but I know from messaging with Chris at Coastal this is 5.1% ABV. It is hard to figure out the code printed on the bottom of the can, but I am going to assume the part that reads 308 refers to the 308th day of the year. Can provided for review.

Quick back story on the beer: Coastal Empire Beer Co. is located on the corner of Nettles Industrial and Ross Road, and is strong stones throw from where Old Savannah Brewing was once located. Savannah’s original craft brewery, Old Savannah Brewing opened in 2006 but sadly only lasted a couple of years. The brothers at Coastal reached out to former head brewer and co-owner Jentri Hand, and after a few months she agreed to work with them on a collaboration beer. Thus Nettles & Ross was born.

The color of this beer is fantastic; it pours with a clear but dark gold color that has some serious amber and red highlights. The head unfortunately leaves a good bit to be desired though. Even with a vigorous pour I got just a fraction of an inch which settles away to nothing before I even take my first sip. The aroma is rich and malty with a nod to some toasted bread and toffee. Just a hint of nuts on the nose as well, but it is subtle. Classic English ESB on the taste. Again this is seriously malt forward as expected. Flavors of brown bread, a little caramel sweetness, mild roasted nuts, and a pinch of hops that create just the right amount of balance.

Nice work on this one! ESB’s might not be all the rage these days, but this is an excellent representation of the style. 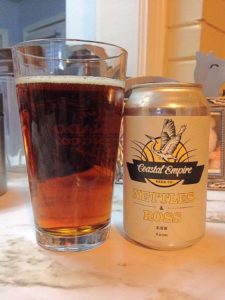