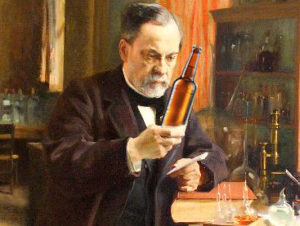 It’s the time of year to celebrate the birth of a man who has brought understanding and clarity to the world. Happy Birthday, Louis Pasteur.

You may best know Pasteur from the process that bears his name, pasteurization. Thanks to Pasteur and this process milk, wine, canned goods and other foods we consume everyday are safer to eat and drink. Perhaps you also know that Pasteur was the man who proved that microbes and bacteria, and not spontaneous generation, were the cause of disease and spoilage. What you might not know is that that proof came though the study of beer.

You see Pasteur was a proud Frenchman. He was born in the small town of Dole, France on December 27, 1822. Though he didn’t distinguish himself by being a particularly good student, particularly in chemistry, he eventually found a place as a physics professor. A colleague convinced him to work with him on some chemistry courses but it was family tragedy that led to his work on infections disease. Pasture lost three children to typhoid fever. Wanting to understand this disease set Pasteur on the path to rewrite our understanding of the world. However, it was his pride that led to his work in beer fermentation.

When the French lost the Franco-Prussian War in 1871 Pasteur directed his disappointment and frustrations into taking over the pride of the German people, beer. In his book Studies on Fermentation: The Diseases of Beer, Their Causes, and the Means of Preventing Them, published in 1876 Pasteur relates, “Our misfortunes inspired me with the idea of these researches.  I undertook them immediately after the war of 1870, and have since continued them without interruption, with the determination of perfecting them, and thereby benefiting a branch of industry wherein we are undoubtedly surpassed by Germany.” Pasteur was angry at the Germans and wanted the French to take over their beer industry, that didn’t happen but what did was even better.

Spontaneous generation was the idea that certain forms would generate out of inanimate matter, maggots form dead flesh, fleas from dust, bees from the entrails of a young bull (I kid you not), or bubbles and alcohol from wort and grape juice. Building on the work of Francesco Redi, Charles Cagniard de la Tour, Theodor Schwan and Antonie van Leeuwenhoek, Pasteur’s experiments showed that spontaneous generation was nonsense and that there was a new world of microbes, bacteria, viruses and yeasts to be explored.

Pasteur’s work not only ignited the scientific world but the beer world as well. Jacob Jacobsen who headed up Carlsberg Brewing was so impressed by Pasteur’s work he founded the Carlsberg Laboratory which focused on the scientific exploration of beer and brewing processes. This lab eventually discovered and identified many of the various yeasts that cause fermentation in beer including Saccharomyces pastorianus, named in honor of Louis Pasteur.

This holiday when you are feasting with family and friends make sure you add a toast, whether it’s with wine, beer or milk, to Louis Pasteur and wish him a very happy birthday.