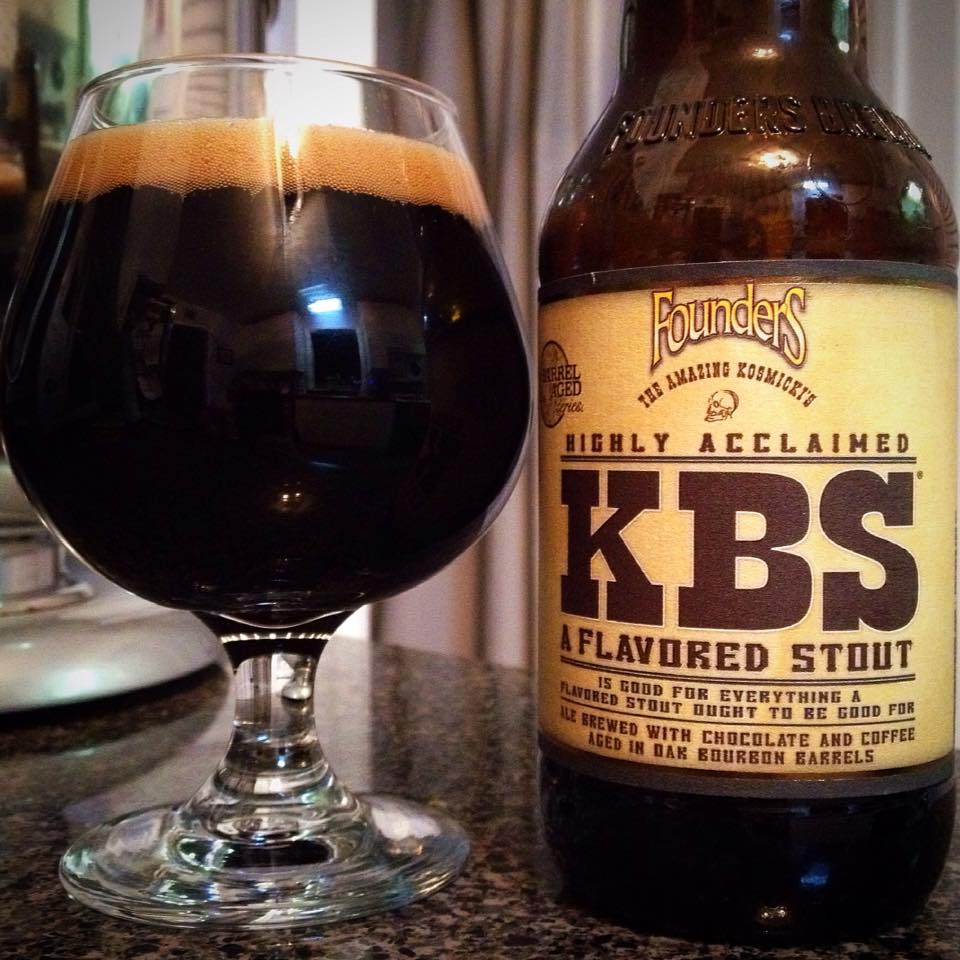 Founders Brewing Company and KBS are both names any seasoned craft beer fan knows quite well. KBS is the official name of this highly sought after beer, but is an acronym for “Kentucky Breakfast Stout”. The beer was first produced in 2003 and at that point it was simply Founders Breakfast Stout aged in a just two Jack Daniel’s barrels. KBS became it’s own recipe shortly after, and needless to say they use a lot more than two barrels to age it in these days. No matter how hard Founders tries to keep up with the demand, this is a beer that is often allocated and carefully distributed. It is rare to see this one sitting on the shelf. KBS currently has a perfect 100 rating on both RateBeer and BeerAdvocate. This review will be for the recently released 2017 vintage.

Although released annually for many years, KBS has moved into Founders newly created Barrel Aged Series. This American Double/Imperial Stout is brewed with coffee and chocolate and is then aged in oak bourbon barrels for 12 months. The white stamp ink on the label is a bit hard to read, but this was bottled on 02/27/17 and has an ABV of 11.8%.

A totally opaque black color to this beer. The head is a coffee tan and settles down to dense layer sitting on top of the liquid. That head laces the glass as it comes down leaving a thick coating behind. No evidence of residual yeast is to be found floating in the beer. There really isn’t much more you could want from a big imperial stout like this one, very pleasing to the eye.

The KBS label has stayed fairly consistent over the years. Some minor font size and wordage changes occur from year to year, but it is always easy to recognize. The “time stained” yellow/tan color is maybe a touch different; and this year’s label also has more of a papery feel as opposed to the more common thicker labels of years past. In addition, a gold Barrel Aged Series stamp can be found in the upper left corner of the front label. The 2017 vintage is clearly marked on the back label for those of you who are fond of aging and verticals.

My first impression of the aroma is that of a major coffee bomb. Super fresh roasted coffee hits the nose almost before I can even get the glass all the way up to my nose. The intense complexity of the aroma becomes apparent after a few minutes. Notes of sweet chocolate covered caramels, vanilla, sweet cream, and oak. Mild but aromatic bourbon makes itself known on the nose as well. Even with a bottle as fresh as this one is, the components of the aroma come together in near perfect harmony.

KBS has it all. The taste starts with a rich combination of sweet milk chocolate and slightly bitter roasted coffee. Sweet vanilla cream blends with some roasted malt and an exceptional amount of that bourbon Kentucky is know for. A general alcohol heat is prevalent in the taste, but I’m not finding it intrusive at all. This is a long way from what I’d call a “hot” beer. More subtle notes of brown sugar, nondescript dark fruits, and a little hazelnut find there way on to the palate but mostly linger in the background. This finish and aftertaste is revealing a long lingering amount of vanilla that is mixing with some sweet creamy caramel.

I feel like the 2017 version of KBS has a considerably larger amount of vanilla than I ever remember in the past. That is not a complaint by any means, it works amazingly well with all of the other elements of the taste!

Full bodied, smooth and creamy while still having enough carbonation to be appropriate for the style. This vintage of KBS falls just short of what I’d call a chewy beer, but there is certainly more heft than I’ve experienced in previous versions of the beer.

KBS (along with Goose Island Bourbon County Brand Stout) is still pretty much the benchmark for which I compare other bourbon barrel aged stouts. The overall flavor, aroma and feel of this beer can change from year to year, but it is always excellent. As for the 2017 batch? It’s like drinking KBS again for the first time. One of the better vintages I can remember having in a few years.

As mentioned above this beer is brewed is massive amounts, distributed nationally, and is almost always a bit of a struggle to hunt down. Sadly this sale of KBS is often limited to a bottle or two, or it’s locked away in the back of the store for those in the know. When it comes to beers like this it usually pays to make friends with your local “beer guy”. Although I’ve yet to miss the chance to purchase a vintage of KBS since 2011, I am always grateful to have the opportunity to do so. In addition to the usual 12 oz. bottle four packs, Founders has made this vintage available in 750 ml. bottles for the first time this year.

You beer travelers out there might want to put Grand Rapids, MI on you bucket list as well. It is the home of KBS Week every March, a full week of KBS related events that culminates in a release party at the brewery.