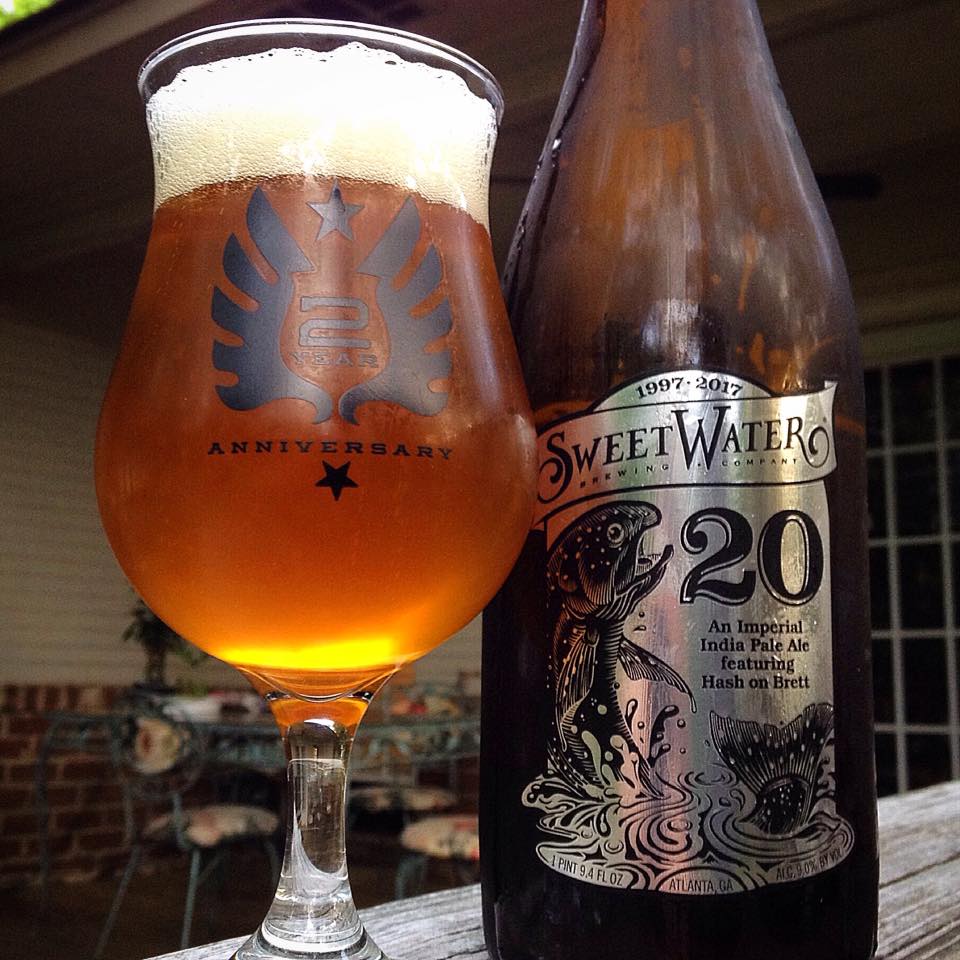 It is easy for those of us living in Georgia to pigeonhole SweetWater Brewing Company as an “everyday beer” craft brewery. Their consistent line-up of solid brews has certainly been serving that purpose for many years. It would be shame, however, for you to sleep on some of their larger bottle format beers. Both the Cork and Cage and Anniversary Ale series are providing beer lovers with some outstanding offerings. 20 An Imperial India Pale Ale featuring Hash on Brett is a relatively new beer, so it has yet to have enough reviews and ratings on either BeerAdvocate or RateBeer to accrue an average rating.

To celebrate 20 years of craft brewing, SweetWater has created a 9.0% ABV American Double/Imperial IPA. The bottle label tells us that they “…added a massive dose of Hash for an aggressive hop punch, and followed with a secondary fermentation on Brettanomyces to bring some funk to that soul.” The hash refers to the process of adding pure hop lupulin that SweetWater introduced to some of their beers back in 2014. 20 Hash on Brett was brewed with Pilsner, Maris Otter, Wheat, Flaked Oats, Midnight Wheat, and was hopped with Bravo, Mosaic, Citra hops. Both Mosaic and Citra were also used to dry hop the beer. There is no bottle date on the label but this was released in early 2017.

I’m enjoying the sharp simplicity of the label art. The silver and black design on the cork and caged 750 ml. bottle is reminiscent of Brooklyn’s Black Ops. My eye picked up on this immediately when I saw it on my local store shelf.

The beer itself pours with light golden color that has some yellow and orange depending on the angle you hold it to the light. A big active off-white head consumes the top third of my tulip glass. The head slowly fades down to slim layer that never settles far enough to reveal the beer itself. The initial pour is mostly clear with just the slightest bit of haze preventing this from being a crystal clear Imperial IPA

The Brettanomyces is working some serious overtime on the aroma! Although Brett can reveal itself in many different ways and on its own timeline, I’d have to say this is as tell-tale as Brett can be on the nose.

Fruity and funky to start, some ripe peach and papaya notes hit my nose at first. A secondary layer of pineapple, orange and some caramel malt sweetness arrive as the beer makes its way towards room temperature. I am impressed by how delicate, yet intense, the aroma of 20 Hash on Brett is.

A moderate tropical fruit sweetness leads off the taste of 20 Hash on Brett. Mango, pineapple, and ruby red grapefruit make up the early stage of the flavor profile. At this point the Brett and bittering hops begin to have a profound effect on the taste of the beer. Brettanomyces funk and dry earthy hay becomes intertwined with all of that potent hop “hash.” It’s creating a different bitterness than I would expect from a normal Imperial IPA. A return to the sweeter hop side follows with some notes of sweet clementine orange, huge pineapple, honeydew melon, lemongrass, and a generically floral hop note as well. The finish and aftertaste is dominated by bitter grapefruit pith and more of that dry Brett funk.

This is far from what I’d call a boozy beer. The 9% ABV stays hidden for a while, but just a touch starts to come out in the taste as the beer warms up. This beer is a case study of a Brett fermented beer that is complex and drinkable.

Dry. This very well might be the driest beer I have had that wasn’t aged in a barrel! The carbonation level is appropriate but I kind of feel like it could use more to combat the dryness of the beer. SweetWater does bottle condition most of their beers, so it is certainly possible that this one could pick up a couple of extra bubbles over time if cellared warm for a month or two. There is also an interesting buzz or tingle left behind after each sip. That tingle reminds me of a little bit of when you indulge in too many salty or spicy snacks.

An excellent beer for SweetWater to celebrate 20 years of “heady brewing”. 20 Hash on Brett seems to get more of its character from the Brett than the hops, and that is just fine by me. It is an awesome example of how Brettanomyces changes a beer.

This should not be a terribly difficult beer to find if SweetWater is distributed in your area but that doesn’t mean it isn’t worth your attention! Probably not the kind of beer you would want to be the center piece of an upcoming beer trade, but it is a super solid add-on to ask for when beefing up a trade. I rarely suggest aging beer these days, let alone an Imperial IPA, but the Brett character could become even more potent over the course of a few months. Aging this could be interesting, but I’d only keep it six to eight months.