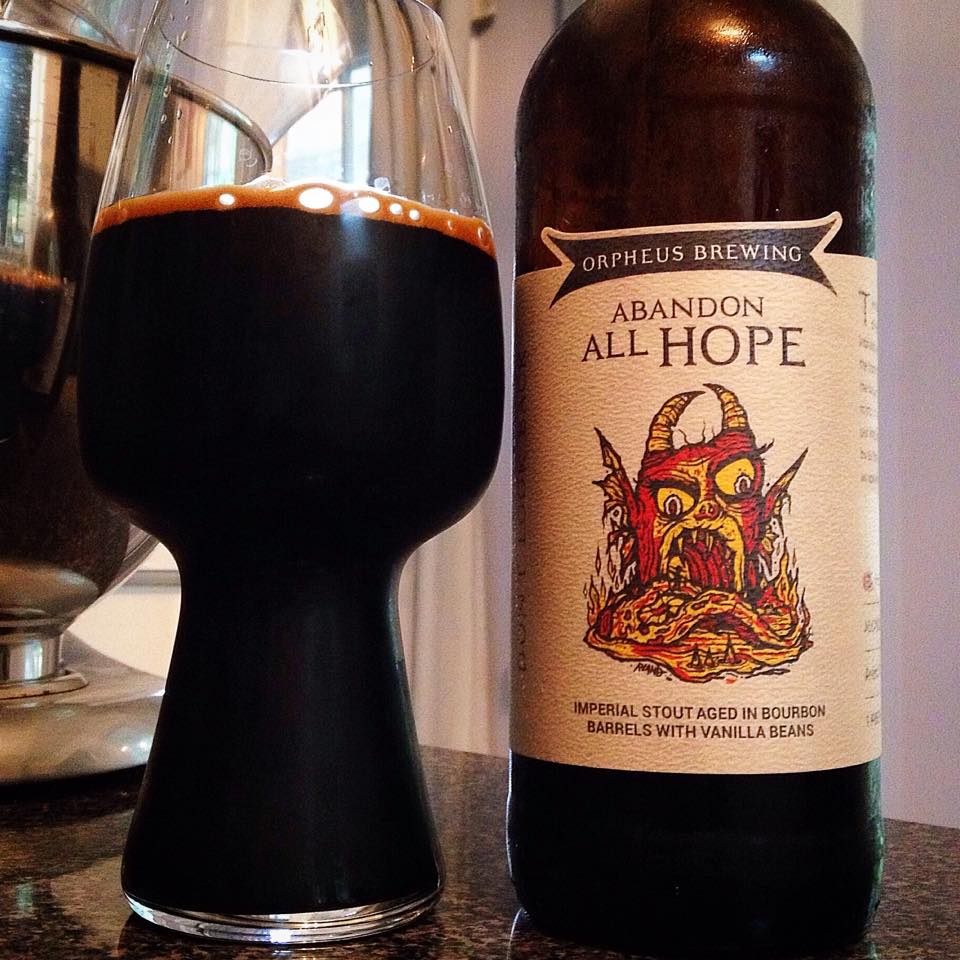 Orpheus Brewing has no intention of doing things anyway but their own. The philosophy of the Atlanta brewery is pretty simple, “Create delicious beers that we want to drink but that don’t exist already.”

Orpheus shot out of the gate in 2014 with an excellent selection of saisons and IPA’s, much to the excitement of this craft beer nerd. Over the course of the next few years several highly regarded barrel-aged beers slowly began to appear on the market. After having the chance to try a handful of them, I now know it’s in my best interest to pick up a new one when I see it.

Orpheus Brewing Abandon All Hope is an American Double/Imperial Stout, 13.9% ABV. The beer was released on 02/22/17. It would be hard to do a better job describing the beer than Orpheus does themselves on their website: “Abandon All Hope is an overwhelming bourbon barrel-aged imperial stout. Rich notes of chocolate and oak on a pillowy blanket of vanilla come from a year spent in Woodford Reserve Double Oaked, Heaven Hill 10 year, and Jack Daniels Single Barrel Select barrels and aging on fresh vanilla beans.”

This massive imperial stout is brewed with Two-row Barley, Munich, Chocolate, Beechwood Smoked Malt, Special B, Roasted Barley, Black Patent, Honey malt, hopped with Apollo, and fermented with a Belgian Abbey Yeast. In addition to the vanilla beans some dark candy syrup was also used as an adjunct.

The artwork provided by R. Land is rather striking. With inspiration coming from the journey of Orpheus, this clearly depicts some amount of the time spent in Hades. The creature emerging from this lagoon of fire would indeed cause many to abandon all hope.

The beer is a perfect jet black with no light appearing to penetrate any portion of the liquid. The head is basically nonexistent, with just the slightest bit of dark tan foam barely willing itself up to the top of the glass. A small ring settles to the edge, while a wisp in the center of the beer that resembles the flame on a candle slowly fades. For such a small amount of head, this beer does lace the glass like a champ!

This is what your looking for in a bourbon barrel aged imperial stout! The overall intensity of the aroma kind of assaults the senses at first. It is hard to get anything but “big & boozy”. The second (or maybe third) sniff starts to reveal the layers of aroma.

Sweet caramel fudge brownie and natural vanilla hit my nose in the first wave. Soon to follow is potent bourbon, dry oak, wet tobacco, and creamy milk chocolate. Some more subtle notes of raisin, mild smoke and molasses find there way on to the canvas as the beer warms up a bit. Complex without being over done, Abandon All Hope is one fantastic smelling beer.

I can’t imagine how much vanilla they must have used for this beer. Needless to say some HUGE vanilla is the flavor that dominates this beer overall. That isn’t to say that this beer doesn’t have more going on than that, but that vanilla hits you right upfront. Thankfully that big flavor is natural and somehow never seems to be too much. There is enough going on behind the vanilla to keep this from being a cloying vanilla bomb.

A rich and sweet caramel flavor actually starts the flavor profile just before the vanilla hits. This is followed by some outstanding bourbon and oak flavor (and probably more vanilla!) that sticks around as an underlying base note throughout the taste. The malts themselves have a slightly roasted flavor with a hint of smoke, they’re doing their best to combat the sweetness. The finish retains the vanilla, bourbon and oak while adding a helping of chocolate fudge and a pure alcohol burn.

Abandon All Hope is about as full bodied as a beer can get. Each dense, yet silky sip fully coats the mouth before moving on. I was really worried about this beer being flat after the lackluster sound from the cap being popped. The pour that immediately followed did not quell those fears. It turns out that the mouth-feel of this is about perfect, but any less carbonation and this could easily go from understated to a syrupy mess.

At this point I have had a ton of bourbon barrel aged stouts, and this one quite honestly stacks up against any of them. I think an overall enjoyment of vanilla is a bit of a must, but this beer is outstanding. At nearly 14% ABV you can certainly choose to age this bottle. The only real benefit I can see from time in the cellar is a possible cooling of the heat of the beer. However, it would be a shame to risk muting out all that vanilla and complexity in my opinion.

According to Orpheus the availability of this beer is “rare”, you can find it on draft and in 750 ml. bottles only. Although I did not have to jump through any hoops to get a bottle of this, the availability of Abandon All Hope at stores is probably dwindling by now. Jump on it of you see one, or if you are a trader try to bundle one into a trade if you can. It is worth it, seek and enjoy!