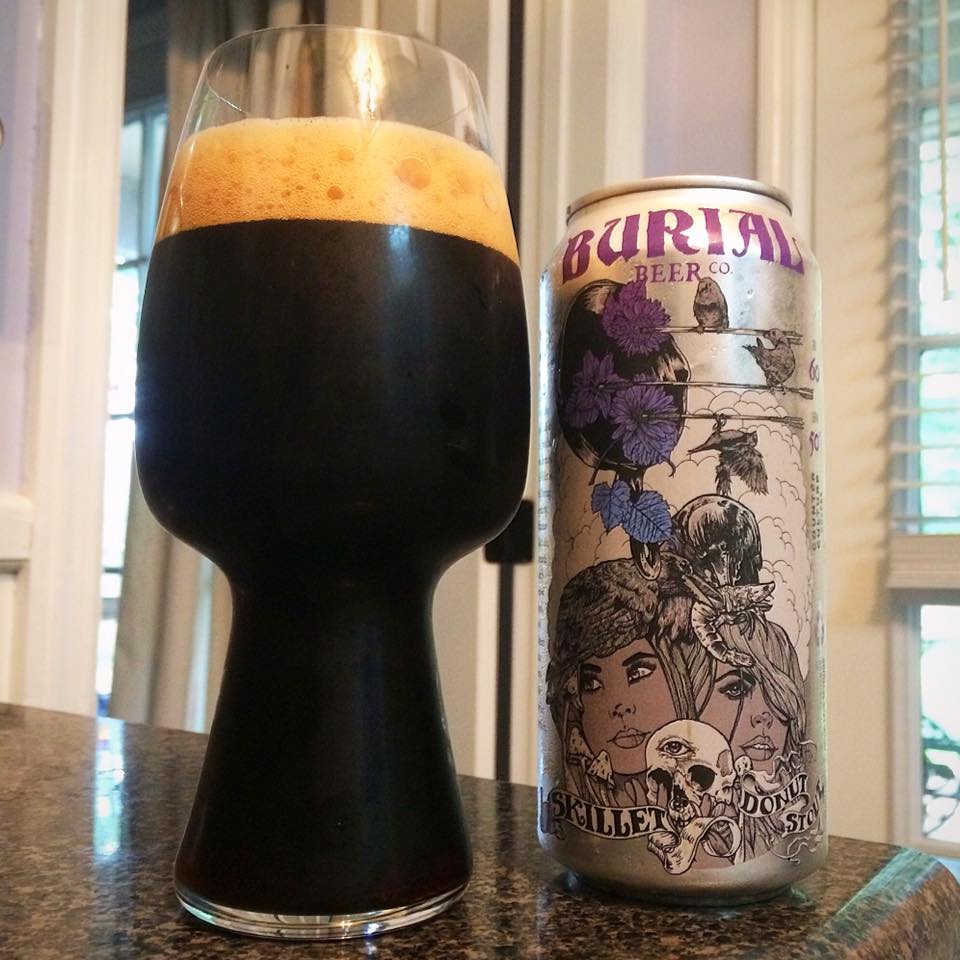 There is no doubt that Burial Beer Co. has the attention of the craft beer drinking world. Opening with a modest one barrel pilot system in 2013, this Asheville brewery quickly upgraded to 10 barrel brewing capacity. This upgrade has led to greater production, distribution and the introduction of 16 oz cans. Although some beer nerds are in search of the variations of Skillet Donut, I was content to finally get my hands of the base model!

Burial Beer Co. Skillet Donut Stout is an oatmeal stout that according to the can is made with “a blend of 9 barley malts, a healthy scoop of oats, molasses, milk sugars, and our favorite blend of freshly roasted Counter Culture coffee beans.” Their take on the breakfast stout comes in at a solid 8% ABV. This can was filled on 05/23/17, making the beer about 2 months old at the time of review.

Burial utilizes intricate artwork on their cans. It all has a bit of a morbid look and feel, lots of skulls and intriguing conflicting imagery. The design style has a heavy metal meets tattoo culture kind of look to it. I must admit I really like it but it isn’t a helpful design when picking up beer at the store. As amazing as the art on the cans is, it all kind of looks the same on the shelf. It really doesn’t help too much that there are two different pieces of art on each side of their cans. Maybe I’ll recognize my favorite beers easily after a while, but right now I’m spending more time than I’d like trying to figure out which beer is which!

As for the beer itself, there is no doubt about the intensity of the blackness of this stout. I have held Skillet Donut to as many light forms that I have in my home, and not a bit of light dares to shine past this liquid. A normal pour created a nice two finger tan head. The foam held strong for several minutes before settling down to a dense ring and thin layer on the beer.

I have had maybe close to a million beers brewed with, or aged on coffee. This just might be the most intense coffee aroma of any of them yet. I expect to get some mild roast or other stout like qualities; but apart from a general sweetness, Skillet Donut is absolutely all coffee on the nose…  and absolutely amazing!!!

So I have to assume the idea here is a coffee and fried donut? Right? The mind blowing thing is that this beer totally delivers!

Living here in Savannah means that my brain instantly associates this beer with a Krispy Kreme donut and a black cup of coffee. I’m here to tell you this beer ain’t far off. The initial taste has that of the deep fried, sugary sweetness of a glutenous glazed donut. Like a good donut, Skillet Donut has a flavor that slowly melts in your mouth with each bite/sip. All that coffee in the aroma should pummel the taste buds immediately, but it takes few seconds for the coffee to take hold. This is total insanity, but each sip is like sitting at your local donut shop. A sweet bite of donut upfront, followed but a sip of black coffee to wash it down.

So good you guys.

The feel of Skillet Donut is pretty spot-on for me. The milk sugars help to create a smooth and creamy feel that compliments the flavor of the beer quite well. The carbonation is never in your face, nor does the beer ever feel flat or under-carbed. Technically it could be a bit more “full” for 8% ABV oatmeal stout, but that is a minor concern with such a high quality beer.

I’m not even sure what I should say to wrap this up? This beer is pretty much amazing. I guess if you hate coffee and donuts you should skip this one. The rest of you should seriously seek and enjoy! As for me I’ll be picking up a four pack or two the next time I see this.

Skillet Donut seems to be brewed on a rotating basis, available often but not all the time. If you are looking to trade for this I think it should be an easy beer to land.